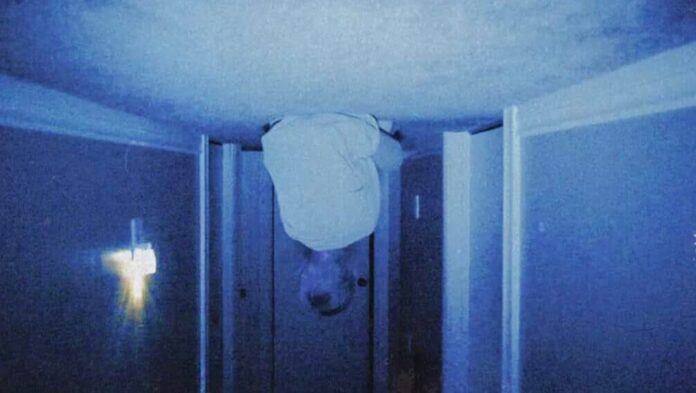 If your TikTok algorithm is tuned anything like mine then there was a period of time when your FYP was full of people talking about the next big low-budget horror sensation Skinamarink. The film which made its premiere at Fantasia Film Festival back in July 2022 garnered some buzz when a copy was leaked during an “at home” screening offered by another festival and subsequently uploaded to social media sites. I was confused but intrigued by the images that flashed upon my phone as I scrolled my feed. It looked grainy and gritty just like the horror I grew up on. I had to see it.

The film takes place in 1995, in a house that’s reminiscent of the house that we grew up in. Four-year-old Kevin (Lucas Paul) and his six-year-old sister Kaylee (Dali Rose Tetreault) wake up in the middle of the night to find their parents gone and the house absent of windows and doors. With only the glow of the tv to keep them company, they slowly realize that they are not alone.

The plot is simple. Two young children are alone in a house that slowly shifts, first losing any form of egress then the lights begin to blink out. Nothing is as it seems as objects move then disappear. The only thing that keeps them company are the cartoons on the tv…but there is something else. Something deep in the shadows is drawing them closer. Sounds creepy as hell right? That’s what I thought. I loved the thought of these kids, confused and alone with only their childhood fears. There’s nothing worse than being 5 years old and afraid of the dark. What’s lurking in the shadows? What’s under the bed? Where are mom and dad?? The problem I had is the execution. I dug the aesthetic. The film grain, the minimal dialogue and overall creepy feel but the way it was shot took me completely out of it. The long pauses on blank corners, the shots of ceilings, the panning shots of carpeted floors, the Lynch-esque shots of toys…it was all a little too Avant-guard for me. I constantly felt like I was only seeing a postage stamp size of the whole picture and it pulled me completely out of the moment. That and the lengthy 100-minute runtime didn’t help it either. It felt like it was taking forever to get anywhere. I get it though. Horror is subjective. That arthouse style is something some people love but unfortunately, I’m not one of them.

Don’t get me wrong though, I’m impressed with what Kyle Edward Ball did with a budget of $15,000 CAD and applaud his efforts. We need more independent horror writers/directors like that, out there taking chances and bringing us new and exciting stuff. There’s definitely an audience for everything and this film is proof. Just take a look at the high percentage on Rotten Tomatoes (88% at the time of this writing) and the scores of praise heaped on this movie but for me, in all honesty, this could have been a 20-minute short and I would have been much happier. Skinamarink hits select theaters tomorrow, Friday the 13th and will be streaming on Shudder not too long after.