A retired special forces soldier puts his old skills to new use when his family is threatened, he becomes a one man army. Generally speaking that log line would amount to the “formula” for a film like Last Resort, the new action flick from Jean-Marc Mineo starring Jonathan Foo, but this particular set of circumstances has been done so much that it really has to be considered it’s own sub-genre of film. Don’t take that as an opening salvo against Last Resort, I’ve said countless times that there is absolutely NOTHING wrong with following a formula as long as you make the details your own adding a sprinkle of unique. Hell….it’s a formula for a reason, it’s a story that makes sense and pulls interest.

Michael is a former special operations soldier who’s enjoying a normal quiet life with his wife and daughter, Kim and Anna. This all changes when Kim and Anna happen to run an errand to the bank at the same time that a lethal band of mercenaries playing bank robber descend upon the building. Knowing that only HE can guarantee the safe return of his family Michael puts his old skills back to work dispatching those who would do his people harm. Things get really hairy when it becomes clear that money wasn’t the primary objective for the bad guys but rather a lethal toxin that could kill millions immediately changing Michael’s mission from saving his family, to saving his family and his city. 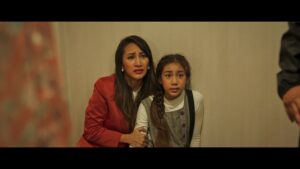 Again…formulaic? Yes. Is that a negative thing? No, having your film follow a formula is no different in my mind then setting a film in LA. What matters is showing something new, that’s the challenge Last Resort had. Now, one benefit of an action/martial arts film is as long as you nail the fight choreography, all other sins can be forgiven. Unfortunately, I think this is where Last Resort really missed the mark. Incorporating a mix of gunplay and martial arts the film seems to have taken some inspiration for films like The Raid, very hard hitting, visceral moves making the combatants look like they have sledgehammers wrapped in skin for arms. The secret to the jaw-dropping nature of The Raid is two-fold. Gareth Evans kinetically chaotic shooting style and the energy and enthusiasm of Iko Uwais, both of these qualities are missing from Last Resort.

Starting with Jean-Marc Mineo’s direction, the camera seems to lazily follow the action capturing everything there is to see but is too timid to really get in there. Instead of getting right in the fight he instead keeps a safe distance, choosing to only get in with the combatants for very short bursts…almost as if the camera itself was afraid of being pulled in the rumble. This results in fight scenes that start to pull you in but never get you fully enveloped in the action. I want to be very clear here that I don’t think the choreography was the issue, quite the opposite there are some VERY well put-together fights between the credits but without the right direction it becomes like looking at the Mona Lisa in a dark room. Next up is Jon Foo, the film’s star. The man has skills, that is apparent and not up for debate but he seemed….I’m not sure how to put it, tired maybe? Check out the trailer at the bottom of this review and you’ll see what I mean. It almost seems like he was going for something specific, the soldier that’s seen it all and is therefore calm in situations that would make any of us lose our minds, but that’s not how it comes off. The end result seems most like someone that is slightly annoyed that they have to take time out of their day to save their family and city….or at least someone who is in desperate need of some coffee.

I don’t want you to be mistaken, if you are an action fan you will find something to like with Last Resort but it most certainly won’t be the type of film that you think about when it’s over. The action is solid and consistent, the film itself has a 1hr 47 min runtime during which the gas is kept pressed the whole way through. Great performances? Phenomenal fight scenes? No, but there’s enough there to make it worthwhile if the “one-man army” sub-genre is your thing.

Last Resort is in theaters now, VOD on January 10th.

Official Synopsis:
A former special forces soldier becomes a one-man-army when his wife and daughter are taken hostage during a bank robbery. As he brutally neutralizes the gang of thieves, the lives of millions hang in the balance when a highly lethal toxin is stolen from the vault.