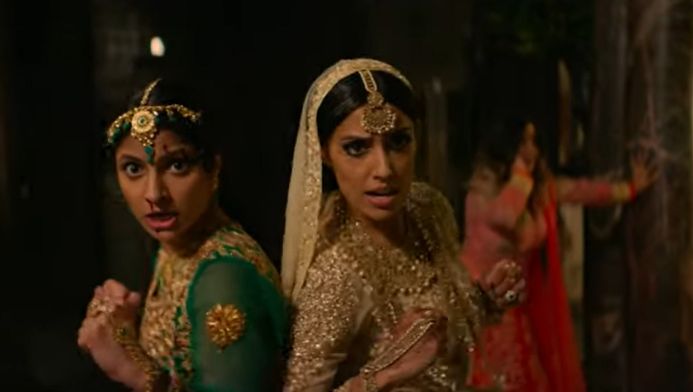 Some movies are just such pure fun it emanates from every piece of PR that’s released. Polite Society an upcoming action-comedy from Nida Manzoor is exactly that, you can not watch the trailer below and come away with anything but a smile on your face. Ria, an aspiring stuntwoman/student goes on a mission to save her older sister Lena, the only one that gets her, from her future evil in-laws.

Sure the plotline doesn’t sound like anything special but every second of this footage is packed with exactly what movie going audiences want to see, action, laughs, love. Oh, I forgot to mention, Ria is of Indian decent so it’s also got amazing costumes. Seriously, does anyone do dress up better then India? Their celebrations are a sight to behold if you’ve never seen one, such color!

Of course, I do have a side reason for hyping this movie so hard, that reason goes by the name Ritu Arya. If you don’t know the name surely you’ll know her from her amazing performance as Lila on The Umbrella Academy. She is so much fun to watch and has a personality that elevates everything she does on screen. Factor in the comically evil Mother-in-law (in a terrifying body waxing scene) and you have a film that’s fit for a good time.

Check out the trailer below and look for Polite Society in theaters on April 28th, 2023.

Official Synopsis:
A merry mash up of sisterly affection, parental disappointment and bold action, POLITE SOCIETY follows martial artist-in-training Ria Khan who believes she must save her older sister Lena from her impending marriage. After enlisting the help of her friends, Ria attempts to pull off the most ambitious of all wedding heists in the name of independence and sisterhood.