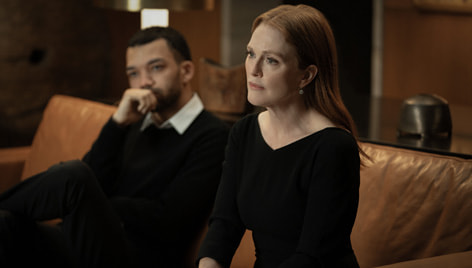 Nobody is who they seem and everyone has a secret in the anticipated A24 and Apple TV+ series, Sharper. Part of the reason for excitement over the neo-noir thriller is its cast, led by Oscar winner Julianne Moore and Sebastian Stan. But that’s just the start of the talent that can be found on both sides of the camera.

The film marks the feature-directing debut of Benjamin Caron, whose work on Andor and The Crown has earned critical acclaim and led to this moment. He developed the film with his sister and longtime producing partner, Jodie Caron. Also in the cast joining Moore and Stan are John Lithgow, Justice Smith, and Briana Middleton. Brian Gatewood and Alessandro Tanaka wrote the screenplay.

Here’s the synopsis: No one is who they seem in Sharper, a neo-noir thriller of secrets and lies, set amongst New York City’s bedrooms, barrooms and boardrooms. Characters compete for riches and power in a high stakes game of ambition, greed, lust and jealousy that will keep audiences guessing until the final moment.

Sharper will get a brief theatrical run on February 10th, before moving exclusively to Apple TV+ on February 17th.