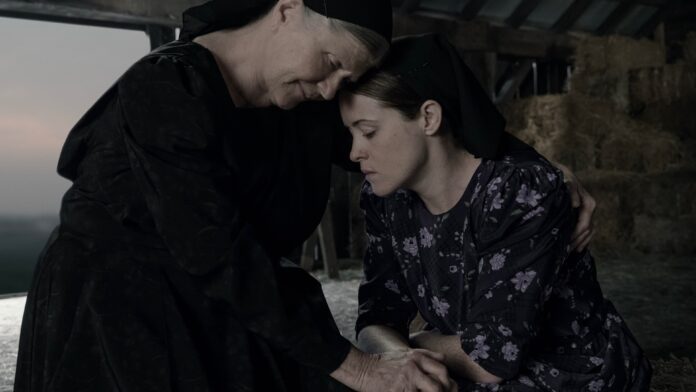 Legendary character actress Judith Ivey is a storyteller. You can see it onscreen throughout her illustrious 40 year career and you can hear it in her voice as she talks her new film Women Taking.

The timely tale follows a group of women debating whether or not to leave their ultra-religious community after it is revealed that the men of group have been assaulting them for years. Ivey joins the likes of Claire Foy, Rooney Mara, Ben Whishaw, Jessie Buckley, and Frances McDormand, playing one of the matriarchs of the families making the decision on the future of their community.

I sat down with Ivey to discuss the film and it was evident how proud she was of it. In our short time together in November, she revealed which character she was originally supposed to play, the bond the cast shared on set, and who inspired her empathetic portrayal of Agata. Warning: some light spoilers ahead.

I’m so excited to talk to you about this movie. It was my favorite movie at the Middleburg Film Festival. I saw it a few weeks ago and absolutely fell in love with Women Talking. How did you get involved in the project and had you read Miriam Toews book ahead of time?

No, I hadn’t. I knew nothing about it. But they reached out to my agent and asked if originally if I would read for the role that Francis [McDormand] played. I was supposed to use the text of Agata. Somewhere in between asking and setting up a Zoom audition, Francis decided to play Scarface Janz, and so they wanted to know if I would read for Agata, which was great because that’s the text I’d been working on. But I was trying to figure out how to take the sweetness out of it in order to play Scarface, who’s pretty tough. Well, of course I would, and the rest is history.

One thing I loved about the film was how director Sarah Polley would drop little bits of information at just the right moments throughout the film, the effect often devastating. Did those moments come through when reading the script and what were some of your initial thoughts upon reading?

First of all, reading it, then actually making it, and then even seeing it after it was completed, it’s a movie I’ve never seen before. And I’m pretty old, so I’ve seen a lot of movies. I think it’s groundbreaking in not only the kind of story she’s telling, but how she tells it and how she wrote it as you just pointed out. I was not aware of a lot of those little nuggets. I think some of those nuggets might have been in our original screenplay in different places. In editing, you discover, “Oh, I should have done it this way.” That’s the great thing about film is you can change it.

The biggest surprise for me was the fact that Agata was supposed to be ill and that she’s going to die. So I felt the obligation of somehow building that into my performance. Sarah was very quiet about it and very subtle about it, and said at one point, “I don’t think you need that right here.” I think she was right because it came as a surprise at a very poignant moment in the film and now you realize she’s frail.

Then there’s the beautiful line that [Polley] wrote at the beginning of the film to the baby who gets born at the end, “If your grandmother were here, she would tell you.” I just gave myself chills. The screenplay was originally narrated by August, the school teacher and they decided to change it to Autje was the youngest girl in our group. I’m not sure that that line was even in there. I can’t remember. I have the screenplay. I keep thinking I’m going to go back and reread it just so I can double check everything that she changed for my own edification. I’m not sure that was there, but what a magical line that tells you so much, which is why I think Sarah Polley is just a genius. There’s so many magical lines in this film.

When we meet these women, we are kind of thrown into their situation, yet their bond and history is deeply felt between them. Was that natural or did you and your castmates bond ahead of time to build that up a bit?

I think it was both. I think it’s inherent in the story and kind of given in the way Sarah wrote for each character. I’ve heard her say in other festival situations how she went through the script, only focused on that one character, and then she’d go through the script again, only focused on another character. She tried to give it a full count for everybody in the story. I think it was inherent. But the way we shot the movie, we shot all the hayloft scenes in sequence, which is very unusual for a film. All of our relationships grew and expanded because each time we came back to start the next scene, we spent days on one scene. There were so many of us in the scene, that to do coverage for everyone, we did many, many, many, many takes. I believe the longest scene is 11 pages long. By the time they had done coverage for everyone and all the various masters or second masters, they counted up that we had done 120 takes.

The extraordinary thing about this is everyone had such great respect for each other as actors, that you didn’t want to let anybody down just because you were off camera. So you gave your full performance even when you knew none of it was going to be recorded because all the shots at that moment were going to be on Claire [Foy] or, you know, on Rooney [Mara]. It was extraordinary. That doesn’t always happen.

One thing I love about your character and your performance is that Agata shows so much compassion to every opinion in that hayloft. Your character is so understanding and loving and gives space to both of those viewpoints. Can you talk a little bit about that and how you created space as an actor to create that relationship with these other women?

Once Agata became my job instead of Scarface Janz, I very much related to her. She reminded me terribly of my grandmother, who was a very religious woman. I always say delightfully, as opposed to oppressively. She was a very fair woman. Everything Agata said reminded me of her terribly, especially her sense of humor, her delight in everybody and really a sense of fairness. She’s sort of the glue saying now “Let’s all sit down and calm down and let’s talk to each other.” I never saw my grandmother in a position where she had to be quite so instructive, but she was incredibly fair to everybody. She lived in East Dallas, Texas, and went to a southern Baptist church and neither one of those aspects of her life are thought of as people who are terribly fair to everyone. Right. But she was uniquely that, and that, that to me was a good model for Agata.

Women Talking is in theaters this Friday, December 23rd. Watch the trailer below.