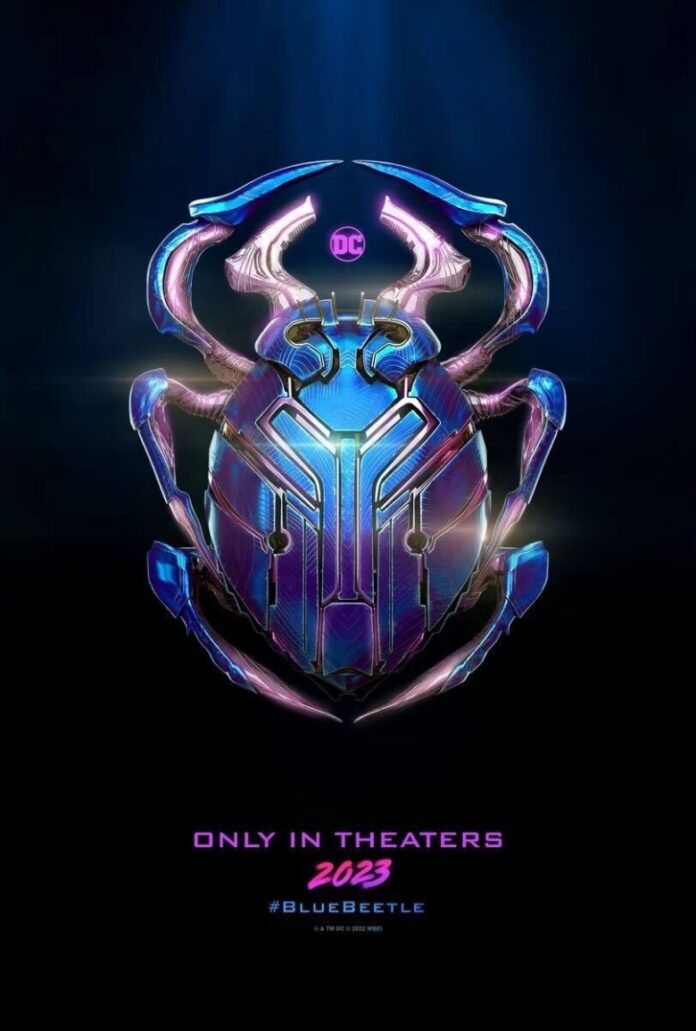 The CCXP fan event in São Paulo, Brazil continues to yield surprising rewards. Yesterday, a surprise panel saw the debut poster for DC’s upcoming superhero flick, Blue Beetle. The film is expected to be a major 2023 theatrical release for the newly-branded DC Studios, after originally being conceived as an HBO Max exclusive. Thank all of the internal shake-ups at Warner Bros. Discovery for that.

With Black Adam already wrapping up its run, all attention is turning to the DCU’s films for next year. Blue Beetle will arrive on August 18th 2023, joining Shazam: Fury of the Gods, Aquaman and the Lost Kingdom, and The Flash. The film will be led by Cobra Kai actor Xolo Maridueña, who will play teenager Jamie Reyes, who gains superhuman powers and armor from an alien scarab beetle. Reyes is the most recent character to take on the mantle of Blue Beetle, preceded by the most well-known character, Ted Kord, who at this point is not expected to be in the film.

Also in the cast is Susan Sarandon as villain Victoria Kord (possibly related to Ted?), Belissa Escodobo as Jamie’s sister Miagros, Bruna Marquezine as love interest Penny, George Lopez as Jamie’s uncle Rudy, and Raoul Max Trujillo as Carapax the Indestructible Man, a recurring member of Blue Beetle’s Rogues Gallery. Popular What We Do in the Shadows star Harvey Guillén also has a role that’s being kept a mystery.  There’s a part of me that wants him to play a version of Booster Gold, seeing as he and the original Blue Beetle are best friends in the comics.

I love this poster. The design is simple, and doesn’t even feature the movie title. But the blue colors really pop, looking almost metallic and glossy. Here’s hoping all of the teaser images are this gorgeous.

*UPDATE*: Blue Beetle’ Casts ‘What We Do In The Shadows’ Breakout Harvey Guillén In Key Role