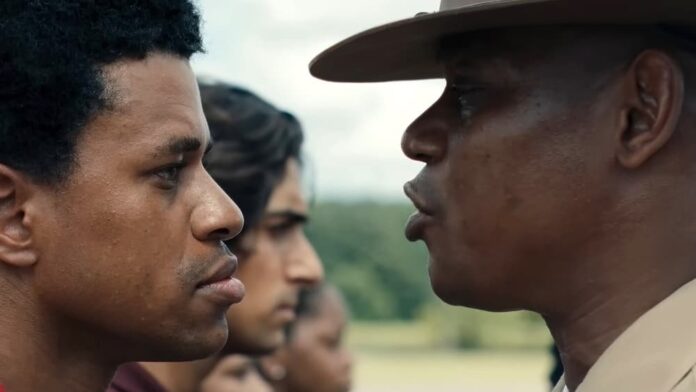 In The Inspection, you keep waiting for the other shoe to drop. Written and directed by Elegance Bratton, the film follows a young gay black man in 2006 as he undergoes training camp. While the film delivers on the kind of homophobia you’d expect from a story set in the ‘Don’t Ask Don’t Tell’ era, lead Jeremy Pope’s performance plays the character with an aura of hope.

When we first meet Ellis French (Pope), he is on the way to his mother’s house to tell her he’s joined the Marines. It is not the proud mother/son interaction you’d expect. Instead, her anger and disappointment about her son’s sexuality bleeds through.

Ellis takes to the physical training pretty quickly, pleasing his tight-ass instructor Leland Laws (Bokeem Woodbine) and making new friends along the way. His triumphs are short lived, however, when it becomes evident to his fellow cadets that Ellis is gay. This sparks psychological and physical violence that pushes Ellis to the edge.

The Inspection rides on Pope’s performance. Layered and commanding, you don’t know if Ellis is going to break down or fight back. Pope is able to gain the audience’s empathy so quickly, giving a fantastic performance along the way. As we watch him face off between Woodbine and other homophobic recruits, Pope is able to portray a sense of optimism that gives the audience a sense of dread that something worse is coming.

Bokeem Woodbine is frustratingly brilliant as the instructor who turns a blind eye to Ellis’ abuse and even perpetuates it. A character actor in every sense of the word, Woodbine disappears into the man with a morally corrupt code and his own set of rules. I wouldn’t say he is fun to watch, but his portrayal is fascinating.

Similarly, Gabrielle Union is completely immersed in her role as Ellis’ homophobic mother, Inez. She plays off of Pope beautifully, dangling the carrot of acceptance in front of his face constantly before pulling it away.

The Inspection is streaming and on-demand. Watch the trailer below.