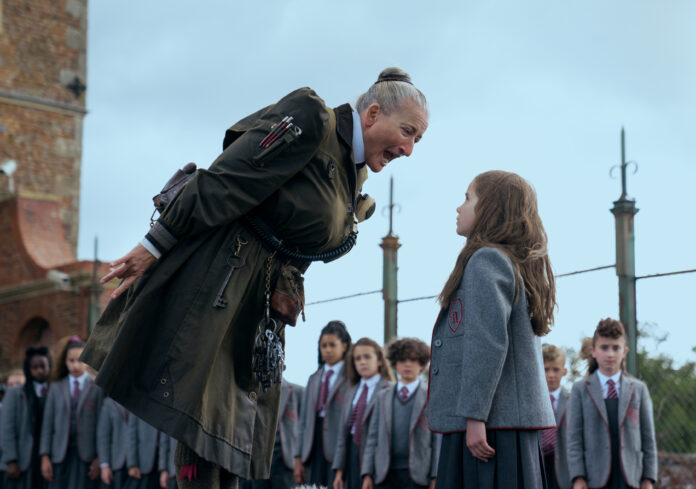 Ask any 90s millennial what their favorite movie was as a kid and chances are they would say Danny DeVito’s Matilda. Close to 30 years later, Netflix is bringing us a new adaptation of Roald Dahl’s beloved children’s book, this time by way of the 2013 Broadway and West End musical of the same name. While the original version showcases the magic of childhood, this version is darker, more true to the book, and captures the power of trauma.

The film harbors the same creative team as the stage play, with Dennis Kelly penning the script, Tim Minchin writing the music and lyrics, and Matthew Warchus directing. Minchin’s songwriting genius is evident off the bat in the opening song “Miracle”, where he establishes the difference between every other family and the neglectful and heartless  Wormwoods through rhyme and nuanced wordplay. With bright colors and fast pans, Warchus tells us that his version of the story is much more chaotic than previous adaptations.

This continues as we see the Wormwoods’ daughter, Matilda (Alisha Weir),  grow up to be a book-loving young girl, eager to start school despite her parents’ (Stephen Graham and Andrea Riseborough) mistreatment of her. When local authorities come knocking regarding truancy laws, she is placed in Crunchem Hall where her only allies become the lizard-obsessed Lavender and her teacher, Miss Honey (Lyshana Lynch). Run by the domineering and abusive Ms. Agatha Trunchbull (Emma Thompson), the school is an institution for fear and anxiety rather than learning.

As Matilda begins to bond with her class and slowly push back against the headmistress’ treatment of the students, she starts to develop telekinetic powers, which she uses to teach the bullies in her life a lesson. As Trunchbull’s patience wanes, Matilda’s powers grow until the two hit a standoff.

As a director, Warchus translates the stage play onto the silver screen with such precision and tact. During musical numbers, his visuals often match up perfectly with Minchin’s lyrics. However, when the singing stops, the story gets lost in too many characters and plot elements.

As the villain, Emma Thompson strikes a balance between mean, intimidating, and pathetic. She brings a silliness that the character needs to appeal to a younger audience. Matilda almost needs a two-dimensional baddie in order to work, and for some reason, Thompson holds back. However, unlike the rest of the film, she doesn’t go over the top in her performance. When everything else is almost at sensory overload, Thompson feels slightly out of sync.

One thing Warchus has been criticized for is his use of fat suits on the project. Thompson is padded pretty heavily and wears facial prosthetics to appear larger. This feels like an odd choice when the script doesn’t talk about her size at all. The character is an olympian but her body didn’t necessarily have to be altered to achieve the intimidating look. Charlie Hodson-Prior who plays Bruce Bogtrotter also wears a fat suit and it is extremely noticeable in the film’s final dance sequence. Whether or not adult actors should wear padding is up for debate, but having child performers wear them is wrong. Not only could it send the wrong message to a young audience, but it’s a lot to ask of young performers.

Roald Dahl’s Matilda the Musical is bright but chaotic. The script and directing feel overdone at times, to the point where you just want to fast forward to the musical numbers. But when you get there, it’s some of the most fun you will have at the movies.

Roald Dahl’s Matilda the Musical is streaming on Netflix. Watch the trailer below.