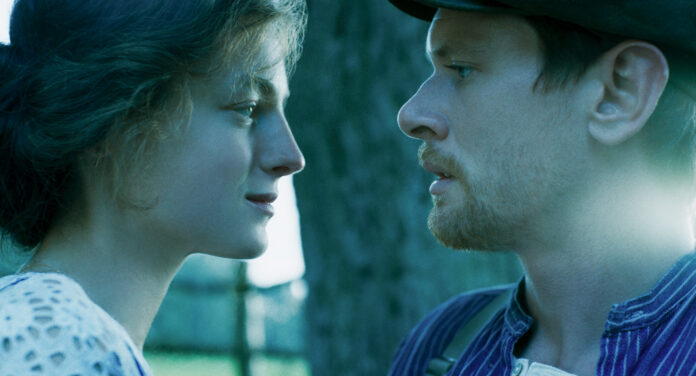 Now there’s Laure de Clermont-Tonnerre’s Netflix adaptation of Lady Chatterley’s Lover, and it manages to be both steamy and British stuffy at the same time. Emma Corrin, most recently seen as Princess Diana in The Crown and in the acclaimed film My Policeman, plays Lady Constance Chatterley. A progressive, feminist woman who begins her marriage to Clifford (Matthew Duckett) in complete bliss. But there is a war raging, and Clifford is called back to the front. When he returns home paralyzed from the waist down, life for them both has been altered in an unrecoverable way.

A woman of culture and society, Constance is bored witless when they move to the countryside where Clifford can manage the family estate. She needs attention, but more than that, she needs affection, which her husband, who is suddenly not the warm gentleman he used to be, fails to provide. Good thing the gamekeeper Oliver Mellors (Jack O’Connell) is such a stud muffin.  A stud muffin who tenderly cares for chickens and reads James Joyce novels.

You can probably guess what unfolds next, but what made the novel such a scandal isn’t the adultery itself. It’s what is said about the people who observed it. Unable to pleasure his wife or father a child, Clifford first suggests to Constance that she have an affair. However, Oliver is hardly the gentleman of stature that he anticipated. The offense most take, and that includes Constance’s fiery sister Hilda (Andor‘s Faye Marsay) is that her affair with Oliver breaks the norms of class and social propriety. She’s a woman of means, he’s not; these things just aren’t done. But what makes them different is how they refuse to be humiliated when the inevitable rumors begin to spread. Sex is the ultimate expression of personal freedom, and Constance and Oliver want nothing more than to be free people.

Is it love or lust that drives Constance and Oliver together? That’s a question Lawrence pondered and screenwriter David Magee ponders still. There’s definite heat generated by Corrin and O’Connell when together, and there is a lot of sex to be had. Some of it is passionate, and other times they give in to animalistic urges. But even though there are full-frontal nude scenes of them gyrating in the rain, the film simply never feels transgressive. Why should it? Sex and nudity are so commonplace now, and infidelity is hardly a shocking thing.

It’s not to say the film is boring, but I think the time of straight adaptations of such vintage material is long passed. Considering the way sex is being politicized anew around the world, a modernized version of Lady Chatterley’s Lover could have something interesting and timely to say. For those looking for something that will fog up your glasses but leave you feeling nice and safe afterwards, this strict retelling should do the trick.