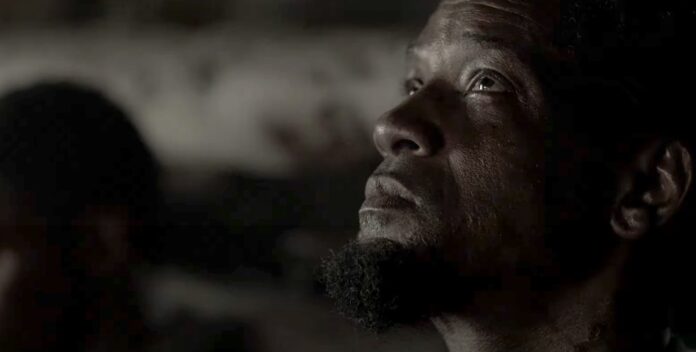 Some years ago, Will Smith nearly took the title role in Quentin Tarantino’s Django Unchained. A famously ultra-violent tale of revenge, Smith turned it down because it really didn’t fit his brand at that time. Hard to argue that point. Smith, before he laid the pimp hand down on Chris Rock at the Oscars, had a sterling reputation as a nice guy. He’s trying to get people to see him that way again. Emancipation, which is more in tune with the kind of slavery movie Smith always wanted to make, could bring him closer to that, mainly because it doesn’t aspire to be much other than an entertaining chase thriller.

This is only a knock against Emancipation because some are trying to peg it as a Best Picture contender for the Academy Awards. But director Antoine Fuqua, and a narrowly-focused screenplay by Bill Collage, have taken a much easier path. Promoted as the story of “Whipped Peter” (Smith), the slave whose photo of his scarred back became a rallying cry against slavery in 1863, the film only acknowledges this for about 30-seconds or so. That quiet and admittedly powerful moment, when Peter reveals his brutalized body, is hurried through so that Fuqua can get to what he knows and does best: action. Big cannons, muskets, death…Fuqua can shoot this stuff with ease. The quieter, more impactful emotional moments? Smith handles those well, but they are few and far between. Unfortunately for them, it’s those moments which elevate this admittedly tiresome subgenre of Black movies. 12 Years a Slave is full of them, and it won Best Picture deservedly nearly a decade ago.

A man of deep faith, Peter consoles his wife Dodienne (Charmaine Bingwa) and children after he is sold and forced to work on the railroads. Emancipation is full of such everyday scenes of horror; families being torn apart, Black bodies being beaten and tortured, large fields with the heads of runaway slaves mounted on spikes. Shot by cinematographer Robert Richardson in muted grey-ish tones, it’s hard to avoid the feeling that everyone is one step away from the grave in this sick, dying world. That is never more true than for Peter, who is in the midst of despair until he overhears that Abraham Lincoln has declared all slaves to be freed men, and that his army is nearby in Baton Rouge. Peter, along with a handful of other captives, make their escape and race into the swamps to secure their own freedom. However, hot on their trail is Fassell (Ben Foster), an infamous tracker who hunts them down with his pack of dogs and a Black colleague.

Fuqua’s direction shines during the chase sequences, which amounts to a bulk of the film. He knows how to keep the tension high, with Peter forced into dire confrontations with murky swamps, alligators, the slave patrols, and of course, Fassell who never seems to be more than a whip’s length away. The greatest hurdles Peter has to overcome are distance, hunger, and hopelessness. One of the strengths of Peter as a character is that, no matter how bleak things may be, he never gives up hope and does anything to be reunited with his family. Peter is narrowly focused on survival, as he should be, but it doesn’t make for the most complex portrayal for Smith. He’s best when things slow down, and he must react to the terrible world around him, always with a look of shock or anguish on his face. Smith gets what are undoubtedly meant to be his “Oscars moments”, but it’s a problem that they are so obvious and don’t feel especially organic.

I can see already that Emancipation is a film that will inspire a lot of debate. The funny thing is, it probably shouldn’t be. It is an entertaining Antoine Fuqua movie. If I were to hire Fuqua to make a slavery-era film this is exactly what it would look like. And he is a director whose work I enjoy a lot, and this is a film that I would definitely want to watch again. But that’s just it. I would watch it again because it isn’t that emotionally deep. I would never watch 12 Years a Slave again, as I have avoided rewatching many other slavery dramas. They’re too draining, they hurt too much, they don’t entertain as much as remind.

Emancipation concludes with a big, defining battle, with Peter leading the charge of Black soldiers, many of them freed slaves like himself, against the Confederates who would put them back in chains. It is a grand, sweeping fight with lots of cannon fire, acts of heroism, and bloodshed. Fuqua absolutely loves it. His camera noticeably picks up a beat during these moments. And Smith, too, is at his charismatic best playing the champion who not only secured his own freedom, but literally fought to secure it for others. Peter’s story is incredible, and Emancipation is propelled by that fact even if it never reaches the level of greatness that it could have achieved.