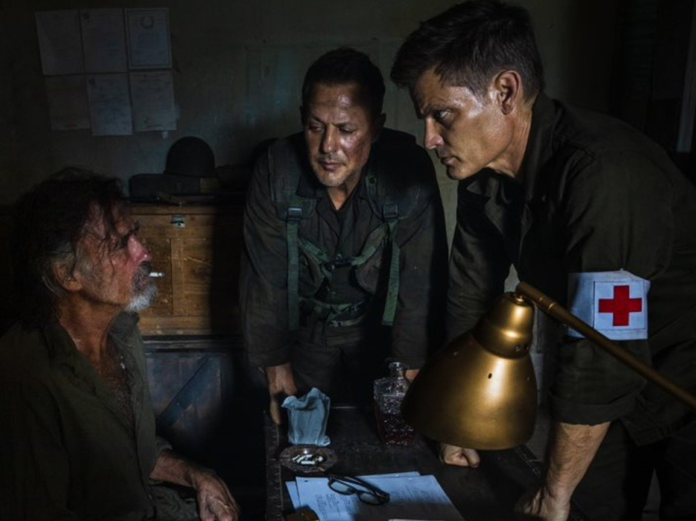 In the summer of 1944, a battle was waged on the Japanese island of Saipan known as Pacific D-Day. Battle for Saipan focuses on a US military hospital in Saipan under the command of General Jake Carroll (Jeff Fahey). General Carroll used to be a legend, a war hero. Now he is a shell of his former self. He sits at his desk sweating his ass off while smoking, drinking, and listening to music. Vic (Casper Van Dien) is a surgeon at the hospital and one of the only people that can get through to General Carroll. The hospital is criminally understaffed and the long hours with no sleep are catching up to Vic. However, things could definitely be worse, and Vic is about to find that out the hard way.

Major William Porter (Louis Mandylor) is leading his squad around the island doing a sweep when they get ambushed. Only Major Porter and Private Gustavo Esposito (Randall J. Bacon) survive the attack, but not unscathed. Private Esposito is stabbed and needs medical attention badly. As Major Porter is trying to get him to the hospital, they overhear enemy plans. Field Marshall Tagawa Fukuda (Nobu T Watanabe) has ordered an attack on the hospital. Major Porter makes it to warn General Carroll in time, and almost right on cue – the attack commences. Vastly outnumbered, the US soldiers and healthcare workers must do whatever they can to survive the attack.

Brandon Slagle wrote and directed Battle for Saipan. This is typical for Slagle as he has written a majority of the films he has directed. Battle for Saipan reminded me more of a level from Call of Duty than a film. Your squad is trapped inside a building as enemies are trying to overpower you. There could be a bad guy around any corner, so it’s important to slowly make your way across the level. NPCs galore jump out at random places engaging you in combat. Meanwhile your co-op partner is upstairs with a sniper rifle trying to thin out the approaching herd one by one. Come to think of it, if that was all Battle for Saipan was, it may have been pretty solid. Unfortunately, we get more, and that doesn’t help the final product. 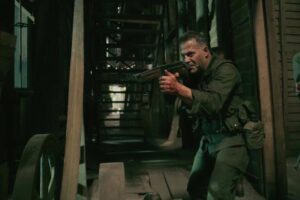 For a film filled with a fair amount of action, blood, various weapons, and death it somehow drags by. The pacing is frustratingly slow and the monotone and emotionless delivery of lines amplifies this. The acting across the board leaves a lot to be desired. At times it reaches a level that removes the user from the film and disrupts the atmosphere Slagle created. While the action scenes are fairly enjoyable, Battle for Saipan lacks any real depth, especially with the characters. Certainly not enough to truly care about what happens to them. There are small interjections of over-the-top emotions and stories that seem out of place. The events told in Battle for Saipan are a lesser-known WWII tale and there is potential for a solid film. Unfortunately Battle for Saipan falls short and is one that can be skipped.

Battle for Saipan is streaming now on VOD.