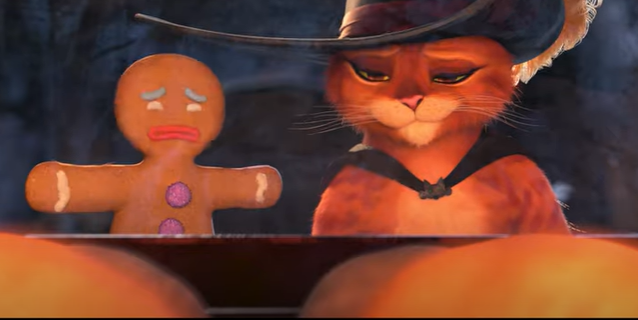 Who would have thought that a side character from Shrek 2 way back in 2004 would have his own series? Honestly? We all probably did, you can’t tell me that Antonio Banderas voice and machismo combined with the awesomely animated suave kitty cat didn’t jump off the screen and demand more story, it was just too perfect.

DreamWorks latest efforts with the swashbuckling feline, Puss In Boots: The Last Wish marks the 3rd project with Puss in the title role (the fifth title in which he appears) and is bringing back everything that makes this series loveable. In addition to the returning stars, Antonio Banderas and Salma Hayek (Puss in Boots and Kitty Softpaws, respectively) they’ve upped the star power adding Florence Pugh’s smokey vocals for Goldilocks and John Mulaney as Jack Horton.

The trailer below puts Dreamworks gorgeous animation on full display and promises all manner of fairy tale fun as Puss goes on the hunt for “The Last Wish” which he can use to restore the eight lives he’s already used up.

Look for Puss in Boots: The Last Wish on December 21st, 2022 and check out the trailer below!

This fall, everyone’s favorite leche-loving, swashbuckling, fear-defying feline returns. For the first time in more than a decade, DreamWorks Animation presents a new adventure in the Shrek universe as daring outlaw Puss in Boots discovers that his passion for peril and disregard for safety have taken their toll. Puss has burned through eight of his nine lives, though he lost count along the way. Getting those lives back will send Puss in Boots on his grandest quest yet.