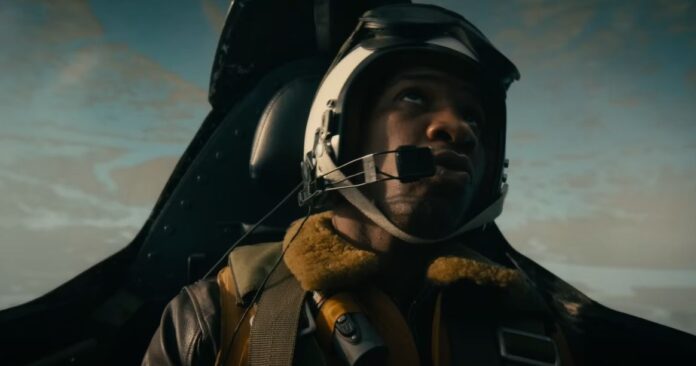 I’m an absolute sucker for a good old fashioned dogfight. Not the Top Gun stuff mind you (though I love that too), those would never happen in real life. Today’s fighters engage from miles away and the guns they’re equipped with are little more then decoration. No, I’m talking pre-jet aviation, WWII/Korea time frame when these aviators flew by instinct and guts alone, where each engagement was personal…there’s no feeling like watching that unfold on screen. The other thing I love about Devotion, the upcoming “Based on a True Story” film that follows two aviators, one Black, one White, that are paired up to fight in the Korean War, is that it highlights the contributions made by African-Americans to establish American military supremacy in the mid-20th century.

Now in case you think this just makes for a good movie, let me set that straight. Black fighter pilots were among the best in the sky during World War II plain and simple. That’s WITH the immense amount of prejudice and, no better way to put it, BS they had to deal with just to sit in the cockpit. If you need some reference material just look up some details on the success rates of the Red Tails during their bomber escort missions when compared to everyone else. But I digress.

Devotion stars Jonathan Majors and Glen Powell as Jesse Brown and Tom Hudner, a pair of Navy fighter pilots who distinguished themselves as some of the best aviators of the Korean War. As I made mention earlier, I’m a sucker for a good fighter plane film but looking at the gorgeous, pulse pounding footage included in the final trailer released today I have to assume you’re not going to need to be like me to enjoy this film. Travis was in attendance when the film was screened at the recent Middleburg Film Festival and his review, which can be found here, backs up my claim. My only concern is that the film will take it easy on the historical accuracies and try instead for your standard white guy/black guy become friends despite the times and surrounding influences movie. There’s a way to do this with care and respect to the story that actually happened. Glancing at Travis’s review…it looks like they did just that.

Check out the trailer below and look for Devotion in theaters on November 23rd, 2022.

Devotion, an aerial war epic based on the bestselling book of the same name, tells the harrowing true story of two elite US Navy fighter pilots during the Korean War. Their heroic sacrifices would ultimately make them the Navy’s most celebrated wingmen.