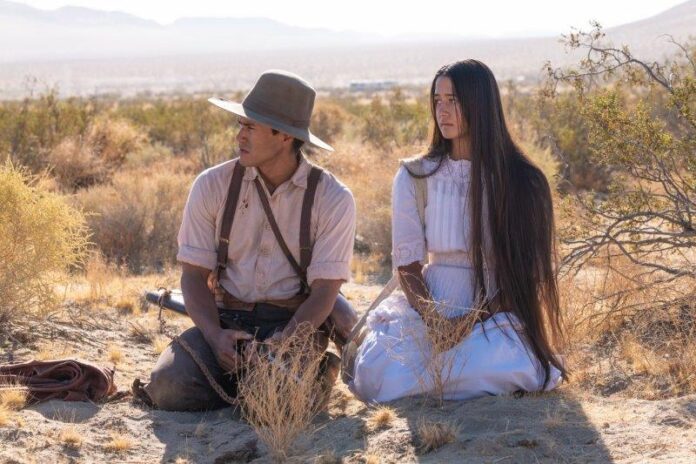 The “manhunt” was a well-liked Western ensemble during its heyday. The local sheriff would round up a posse to pursue the runaway outlaw who committed a horrific crime and bring that person to justice. Typically, this type of justice was a good old-fashioned shootout that resulted in the outlaw being gunned down, after which all would be well with the world. The legend of “Willie Boy” is renowned for being one of the last official manhunts in American history, to the point where the real-life events of the Native American outlaw who escaped the frontier with his lover were depicted in the classic 1969 Western Tell Them Willie Boy Is Here (based on the 1960 novel “Willie Boy: A Desert Manhunt”). The Last Manhunt’s director Christian Camargo decided to do a loose remake of the original.

The couple, Willie Boy (Martin Sensmeier) and Carlota (Mainei Kinimaka), have kept their relationship a secret from Carlota’s overbearing father William (Zahn McClarnon), who eventually figures things out, confronts him, and assaults him. But when has being warned to “keep away from my daughter” prevented a couple from dating? Since this is the Old West, a gun is drawn during another altercation between Willie Boy and William. As the situation worsens, the gun goes off accidentally, and Willie Boy kills his intended father-in-law. Willie Boy and Carlota have to leave town after the crime is committed in order for him to escape punishment.

This leads local sheriff Wilson (Christian Camargo) to organize a posse to take out Willie Boy and bring Carlota back home. Joining him is Native American lawman Hyde (Raoul Max Trujilo), journalist Randolph (Mojean Aria), who wants to sensationalize the story, and a ragtag group of gunslingers including Aquaman himself as Big Jim, a Native American member of the posse to go after Willie Boy.

The Last Manhunt focuses primarily on Willie Boy and Carlota as they battle the elements and the posse pursuing them throughout the way too long hour and forty-three-minute movie. Because this is the Old West, where the land is less merciful, the fugitives had to flee their home in the middle of the night without any provisions after the unintentional murder. The posse that is pursuing them, meanwhile, has problems of their own. The other posse members seek brutal vengeance, which puts them at odds with the Native American lawman who wants to bring Willie Boy in without violence. In the meantime, the writer is doing his best to portray Willie Boy as a dreadful murderer for the newspaper in an effort to sensationalize the story and attract more readers, creating conflict within the posse.

We already know how everything turns out because this is “based on the true story,” and The Legend of Willie Boy is well-known. The Last Manhunt’s writer, Thomas Pa’a Sibbett, and star Jason Momoa (who gets a “story by” credit) aren’t inventing anything new script-wise, because the movie generally goes through the motions up until the dramatic showdown that occurs at the very end. As it is still unclear how the Willie Boy story ended in reality, they do take a few liberties in the conclusion to achieve a happy medium. Even though Momoa is the most well-known face in the movie, he’s undoubtedly overworked with other projects because there are long stretches of time in The Last Manhunt where you don’t see his character Big Jim, making you forget he’s even in it. The plot isn’t as complicated as it believes it is, despite the visually appealing American frontier cinematography that shows off the country’s still-majestic western landscape. It’s best to watch the original movie or read the book if you truly want to delve into the legend of Willie Boy.

The Last Manhunt is currently in select theaters and On Demand.