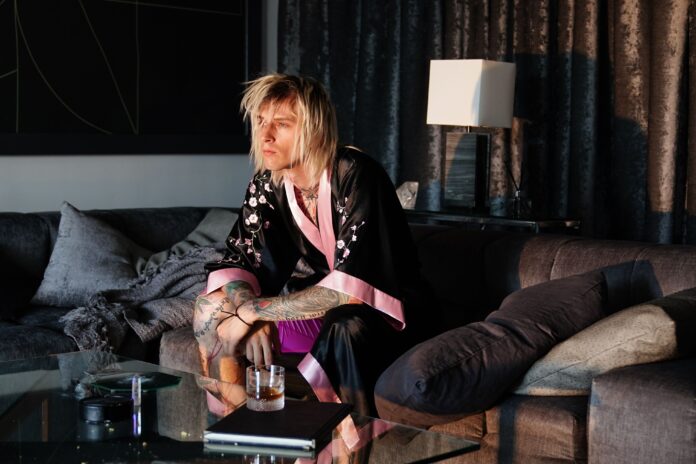 It seems like Cole (Colson Baker aka Machine Gun Kelly) has it all in Taurus. Fame, money, fans, being able to make music for a living. Cole is living out the dream of so many. Yet there is something missing. A void within Cole that he tries to fill with drugs and alcohol. Those close to him can see him unraveling, but there doesn’t seem to be anything they can do.

Cole’s actions are affecting all aspects of his life. He is hurting those closest to him and pushing them away. His daughter Rose (Avery Tiiu Essex) is his biggest fan. Yet whenever she visits him, he is either never around or so high he can’t remember it. Cole’s personal assistant Ilana (Maddie Hasson) bears the brunt of his mood swings and memory loss. He takes everything out on her leading to a toxic roller coaster relationship. 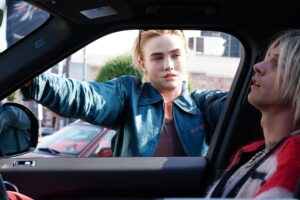 Cole’s issues are alienating everyone around him – from his fans to sponsors to his own family. Even fellow performers like Lil TJay (as himself) are turned off by who Cole has become. They walk the fine line of trying to remind Cole to stay humble without setting him off. Lena (Naomi Wild), an up-and-coming artist itching at her opportunity, also has to delicately toe the line. Cole calling her to the studio at all hours yet showing no interest – all part of the status quo. As Cole’s life continues to fall apart, there’s only so much longer he can continue down this dangerous path.

Taurus is written and directed by Tim Sutton. Sutton and Baker have worked together before, in 2021’s The Last Son. Directing his own scripts is something Sutton is used to. 7 of the 8 films he directed being ones he wrote as well. Interestingly, The Last Son is the only film Sutton directed that he did not write. After their previous collaboration in The Last Son, Sutton is able to use his script and direction to get the most out of Baker. 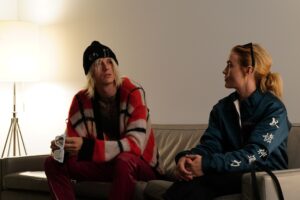 With Taurus, Sutton places the weight of the film on Baker and his abilities. Baker doesn’t shy away from the challenge and is able to step up. He delivers a believable, and at times haunting, performance. While Taurus is a fictional work, Baker as the lead – who is in the industry – adds weight to the role. Having seen the music industry firsthand, he knows what it can do to someone and what fame and fortune can bring. How someone living out their dream can unfold into a nightmare before they know it. Along with drawing from experiences in the music industry, Baker is able to act opposite his girlfriend Megan Fox. Being comfortable with the material and having prior relationships with the director and on-screen romance only strengthen Baker’s performance.

Not only are Fox and Baker one of Hollywood’s most public celebrity couples, but they have collaborated on works before. Baker and Fox were both in 2021’s Midnight in the Switchgrass where Fox shouldered the lead role. Baker, who is more known for his music, has been appearing in films since Beyond the Lights in 2014. With Baker as the lead, Fox makes an appearance as Cole’s ex, Mae. The scene featuring the two of them being one of the film’s stylistic highlights. In a film full of emotion, this particular scene stands out and resonates. Sutton chooses some very interesting shots and effects throughout the film. Numerous scenes are incredibly powerful and unique. As Cole’s life is unraveling, the camerawork is unsettling and disorienting. Echoes, blurs, and disconcerting noises flood our senses. Sutton using them to mirror Cole’s anguish. 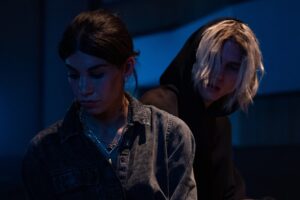 For a film about a musician, music plays an integral part in setting the stage. Sutton and Baker mostly had control of the film’s music with a mutual trust between them that it would be portrayed correctly. However, there is a lack of actual music being made. One scene with Baker and Lil’ TJay is fantastic where despite Cole’s darkness, his talent and passion shine. Yet, those types of scenes are few and far between and Taurus could have benefitted with more of them. When the dust settles, Taurus doesn’t reinvent the wheel or the narrative. It is an unsettling film akin to watching a trainwreck in slow motion. You yearn for Cole to do better, be better. For different choices to be made. That being said, it is a powerful film with solid performances, direction, and music. It is worth a watch, just don’t expect sunshine and rainbows.