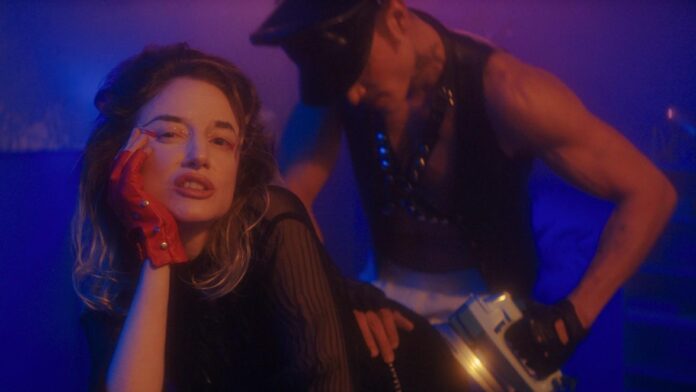 It used to be that queer cinema was underground, shadowy, subversive when in the skilled hands of filmmakers such as John Waters or Gregg Araki. But with queer cinema having found its place in the mainstream, see Billy Eichner’s Bros as an example, it’s simply not enough to have that label attached anymore. You have to have something to say, as well, otherwise being queer means nothing at all. And that’s the problem with Amanda Kramer’s “queer extravagana” Please Baby Please, a zany 1950s riff on West Side Story that explores and recalibrates gender norms on the most surface of levels.

This one should’ve been an easy win because all of the ingredients are there. Harry Potter standout Harry Melling (honestly, he might be the best actor to emerge from that franchise) as Arthur, a seemingly straight-laced guy, and the always-amazing Andrea Riseborough as his girl Suze. One night, they witness a murder by a greaser gang decked out in leather. The couple doesn’t seem all that fazed by the killing, but the outlaws before them…well, they shaked them up pretty good. They both become infatuated with Teddy (Karl Glusman), for very different reasons that force them to reevaluate their sexuality and the nature of their relationship. If there even can be one.

The conversations these characters have might have been edgy a couple of decades ago, but now they just sound a little pathetic and desperate. Arthur is a man so in touch with his feminine side that he rejects any expectations that come with being a man, and that sometimes during sex it’s like Suze is inside him. He sees Teddy as a possible love interest, or more like the man he could be; aggressively open about his homosexuality rather than playing the role expected of him.

For Suze, she also sees in Teddy a kind of sexual liberation. She quickly takes the dominant position in her relationship with Arthur, and begins having wild, surreal dreams where she’s in elaborate musical numbers. In one, the gang of dudes literally stamp a brand on her ass.

It’s all very obvious stuff and not as progressive as Kramer thinks it is. That includes the small role for Demi Moore as a, get this, an actress who has been stifled by marriage and yearns to be a celebrity. The seductive femme fatale might as well be wearing hazzard lights, warning off her neighbor Suze about the pitfalls of domestication. At least Moore, who can pull this kind of stuff off with ease, appears to be enjoying herself.

To be fair, everyone seems to be having a good time here. The stylish, elaborate sets and bright Waters-esque production looks great and feels as camp as we’d want a film like this to be. But what is ultimately the point of Please Baby Please if it isn’t willing to be transgressive? When it comes to queer cinema, the bar for being edgy has been raised and Please Baby Please is still playing catch up.