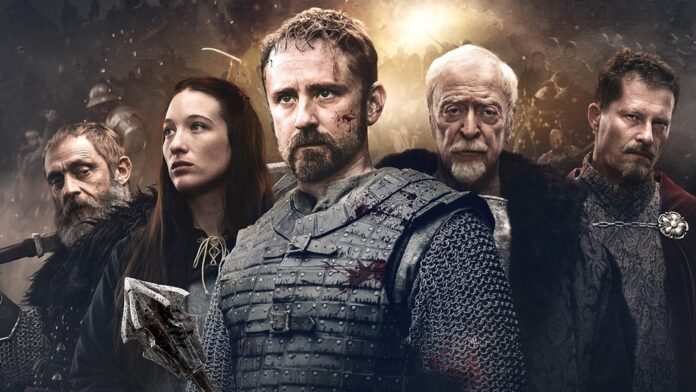 When it comes to action sub-genres the European Knight’s tale has to have the lead against something like “Mysterious Cowboy Drifts Into Town” and be just behind “Ex Special Operator comes out of retirement to *Insert McGuffin Here*”. It’s for good reason, there’s something so primal and cinematic about a warrior in plate armor fighting for what’s right with nothing but his strength and his faith to guide his sword. Honestly, the big screen has been somewhat lacking in this arena of late, with most of the quality stuff coming by way of streaming (Game of Thrones, The Last Kingdom) so it was definitely good to see a feature-length film with genuine stars hit my inbox a few weeks back. 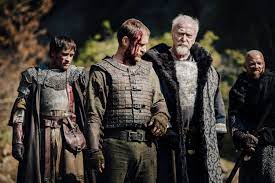 Medieval, directed by Petr Jaki, stars the supernaturally intense Ben Foster, Til Schweiger (Inglorious Basterds) and the eternal Michael Caine (The Dark Knight Trilogy, Literally Everything). Perhaps more interesting, it is a Czech historical drama and is officially the most expensive Czech film ever made at $20.3 USD, sure that’s not Marvel numbers but so much of the world has yet to bring their stories to the silver screen I love seeing new folks join the frey. The story takes place early in the 14th century and follows Jan Zizka (Ben Foster) who has been tasked by Lord Boresh (Michael Caine) to kidnap the niece of Henry III of Rosenberg in an effort to force Henry’s hand and ensure the rightful heir, Wencesias IV, be crowned emperor of the Holy Roman Empire. If you’re thinking that you must have missed something in history class because none of these names sound familiar, don’t worry, it’s not just you. This is the beauty of the Czech Republic putting together such a beautifully made feature film…we’ve heard enough about Henry VIII or the War of the Roses, but surprisingly there was a whole lot else going on in the world between 800 and 1800AD. 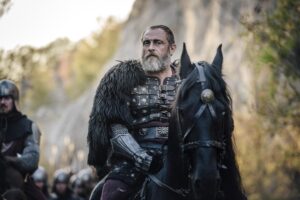 Petr Jaki made a beautiful film, yes, but as a teaching tool in European History classes at colleges across the world, no. Not that there are inaccuracies, to be honest I’m not familiar enough with the story to tell, it’s just that it’s light on the depth of story itself. This isn’t necessarily a bad thing, sure a deep story would have made this film have a bigger impact but it still nails the other half of the equation, the action. As bloody and messy as these types of films can be what with the lopped of heads and battlefields strewn with entrails I’ve always felt like truth was gorier then fiction. Medieval seems to get closer to what I would think life as a warrior would have looked like. First the film really pushes the worthlessness a single life seemed to have (assuming one wasn’t a noble), it’s like living as a peasant or nameless soldier in this time gave you the same life expectancy as a Bond villain’s right hand man but unlike that pivotal henchmen when your time comes…no one really notices. I also loved that they ventured from the standard longsword use to highlight the brutality of battle. You want to show how messy battles were? Use a morning star or mace. SOO many faces were repurposed to hamburger meat by these instruments of death but it never felt gratuitous, that was the magic of this, it just felt like a factual retelling. 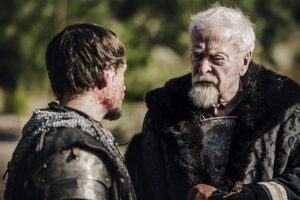 While I’m glad that the subject of the film was a story most of us in the US have never heard, I do wish they would have committed a bit more to that side of things. As it stands the outline is there but the details are added in such a smattering that only stands to make things more confusing. After all, this is the first exposure for a lot of the audience so we need you to hold our hand a bit more through it. I think that’s the difference between a film like this and Braveheart or something akin to that. Both have stellar casts are beautifully shot and contain gripping action, but the story sinks in easier with the latter.

Story issues aside I’m already itching to re-watch Medieval, which I suppose is the plus side to a film that’s not weighed down by story detail…it becomes rewatchable. Ben Foster is perfectly placed as an intense and honor driven warrior who cuts swaths of enemies to reach his goal. If you’re already feeling withdrawal from all things armored and bladed since the finale of House of the Dragon this film is a perfect fix fans can enjoy.