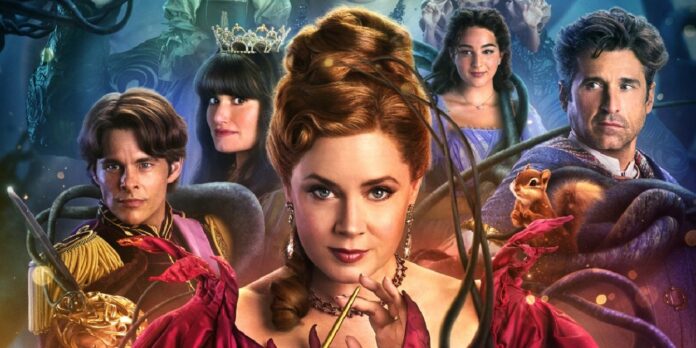 This will come as a shock to you, but “Happily Ever After”, the dream that drives many a great fairy tale and Disney’s 2007 film Enchanted, is little more than a fantasy. That’s something Giselle (Amy Adams) has to confront in the long-awaited (delayed?) sequel, Disenchanted. Nope, it turns out that Manhattan wasn’t a dream come true, after all, all of the dances, happy songs, and talking animals to the contrary.

If this film had arrived a decade ago, it would’ve made more sense. But then, its core audience have perhaps grown into the maturer aspects of the material. However, is that what we really want? The fun of Enchanted was having this goodie two-shoes perfect storybook princess in a fish-out-of-water clash with ornery New Yorkers. The question was whether a storybook romance could exist in the real world. What fun is it now to see that storybook couple slammed in the face by harsh reality…in a boring ol’ suburb, no less?

Giselle and her beau Robert (Patrick Dempsey) have grown tired of the big city. Domestic life has grown dull for Giselle, but not only that, she’s just had a baby, Robert’s now-teenaged daughter Morgan (Gabriella Baldacchino) has become cynical and rebellious, and the house just feels a thousand times smaller. So they uproot the family, much to Morgan’s chagrin, to the fictional town of Monroeville in a house that is such a fixer-upper even the animals are a bit weary.

If a few extra days waiting for the contractors was the only problem, things wouldn’t be so bad. There’s also the local mean girls clique led by Malvina (Maya Rudolph, joined by Yvette Nicole Brown and Jayma Mays as her lackeys), the kind of agenda-pushing mom who is on all of the school board functions, runs every neighborhood meeting, you know the type. She and Giselle don’t get along right off the bat, and the latter gets swept up in the mommy tete-a-tete. So with an angry teen, an overworked and distant husband, and a neighborhood rivalry, what is Giselle to do?

A magic wishing wand gifted by the returning King Edward (James Marsden) and Queen Nancy (Idina Menzel) provides a terrible solution. Wishing things could be as they were when she was in Andalasia, the suburb of Monroeville slowly begins to change into the fairy tale land. And Giselle, she begins to look and act a lot like the wicked stepmother she’s always tried not to be.

Whereas the first film sprinkled in a few big song and dance numbers to bolster the fantasy, Disenchanted is a full-blown musical with nearly a dozen songs and performances to its credit. This is hardly what one would call Alan Menken and director Adam Shankman’s best, though. Certainly you won’t find anything as memorable as the huge “That’s How You Know” Central Park number from the previous movie. This time around there are so many songs that none of them really leave an impression. Not even Menzel’s powerful voice can elevate Nancy’s central song “Love Power” despite her best efforts.

The time has just passed on Disenchanted, there’s no happy fairy tale ending for this middling sequel. Amy Adams was still a fresh-faced newbie when Enchanted proved she could be a box office darling. She’s so far beyond this now that it feels like a step down to have her back as Giselle, singing cringe-worthy dialogue to a sleepy-eyed Dempsey. It’s not that Disenchanted is offensively terrible. It just doesn’t leave much of an impression at all, and to me that’s worse.

Disenchanted is streaming on Disney+ now.