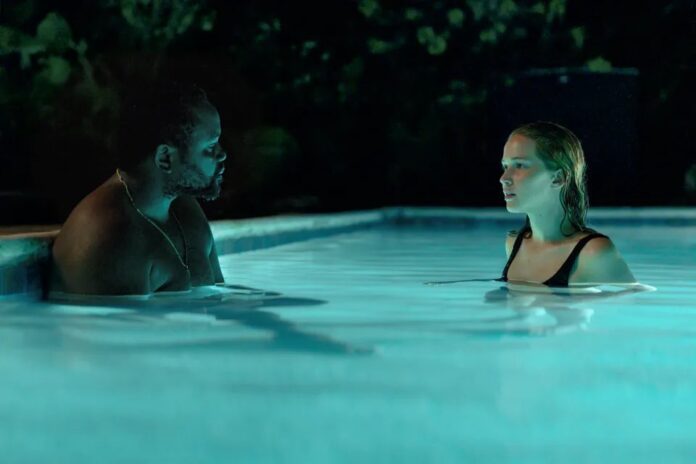 Lynsey (Jennifer Lawrence) already made it out of her hometown once. Now back in New Orleans after a stint in the military that ended with an IED explosion, and significant physical, mental, and emotional injuries, the only thing she can think of us how to get away again. Causeway, the debut feature by Lila Neugebauer, is a somber, heavy drama about people in desperate need of repair. It’s not the kind of movie you emerge saying you “enjoyed”. The characters are so damaged they barely want to express themselves. But it is the kind of film that finds hope in our human need for connection, for a place to call home, and thus it sticks with you long after the credits have finished rolling.

When we first meet Lynsey, taking care of herself is out of the question. She’s receiving therapy to help recover physically and to acclimate to the world again, but she can’t brush her own teeth, wipe her own ass, drive a car. She can barely walk. Lynsey’s face tells the story. There’s anger, but not at being hurt, it’s at not being the person she used to be. We can imagine her as strong, powerful, and independent. It isn’t long before she starts to turn the corner. Lynsey doesn’t look like a ghost anymore. The color comes back into her cheeks, the muscles into her arms. And all she wants to do is re-enlist and get back to work.

This is, by all accounts, an awful idea. Her doctor (Stephen McKinley Henderson) isn’t ready to sign the necessary waiver. Lynsey’s mother (Linda Emond) is unreliable. When they speak, it’s like strangers passing in the night. Their conversations start with the conclusion already in sight, “I’m tired.”  It’s an easy way of avoiding things that need to be said.

Essentially a two-hander, Causeway is carried by the performances of Lawrence and the ubiquitous Brian Tyree Henry as James. A mechanic repairing Lynsey’s broken-down truck, James is another tortured soul looking for a hand up from the abyss. He’s got tragedy in his past, a fatal car accident, and a leg injury that will stay with him forever. The two hit it off casually, like people who have never done this friendship thing before but are eager to try. In a movie that takes a minimalist approach to dialogue, every word between them is to be savored. They don’t talk about anything special most of the time; they get snowballs at the local shop, smoke, drink, clean pools, and just be in one another’s presence. The vibe is romantic, and it feels like a betrayal of this self-serious gloomfest. But then that gets swatted down pretty quickly by Lynsey. And yet James still sticks around. These two need one another, even if neither can be bothered to verbalize it.

Causeway can be like pulling teeth sometimes. Emotional turns are hard-earned, as the characters keep everything so close to the chest. It borders on frustrating until there is the slightest of revelations, and each feels like a breakthrough. This is a movie that requires a lot of investment. Fortunately, Lawrence and Henry find such a perfect rhythm together that it gets easier to stick with. The low-wattage performance by Lawrence will remind some of her earliest roles, particularly Winter’s Bone. For me, I thought of Kristen Stewart in another military drama, Camp X-Ray, that demanded almost exactly the same discipline. Lawrence carefully calibrates her every move, every word, while Henry is every way her equal. Causeway is a tough movie, wearing its somber mood like protective armor.  But those willing to commit will find a tender love story about people who have endured the worst kind of pain and emerged to the other side stronger because of who stuck with them on that journey.

Causeway opens in theaters and Apple TV+ on November 4th.