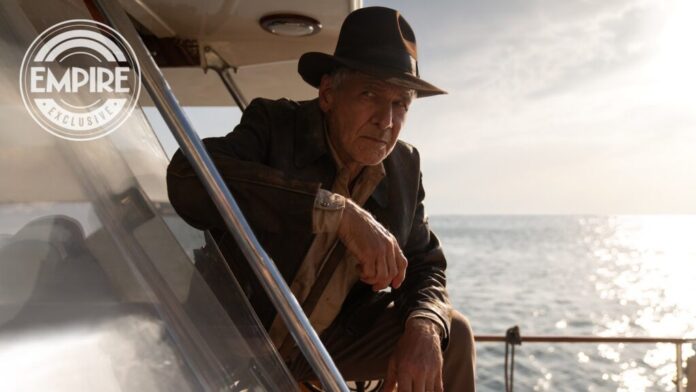 I’m probably not the only one who thinks Indiana Jones and the Kingdom of the Crystal Skull, while not exactly a critical favorite, left Indy in a pretty good place. The film ended with the torch passed (albeit to Shia LaBeouf’s “Mutt”), Indy and the awesome Marion married, and the promise of a long life of adventurous bliss. But again, the movie didn’t please fans, and so it was always inevitable that there would be an Indiana Jones 5. Well, it took forever, but here’s a new official look at it.

Empire has dropped a new first-look image from Indiana Jones 5. Still no official title, but Ford has nothing but good things to say about his swan song as the iconic adventurer…

Steven Spielberg passed the directing reins over to James Mangold, who directs from a script he co-wrote with Jez and John-Henry Butterworth.  And Mangold has made it his mission to depict Indy as a man of a certain age, in the twilight of his life…

“It became really important to me to figure out how to make this a movie about a hero at sunset,” Mangold said. “The issues I brought up about Indy’s age were not things I thought were being addressed in the material being developed at the time. There were ‘old’ jokes, but the material itself wasn’t about it. To me, whatever you greatest liability, you should fly straight towards that. If you try to pretend it’s not there, you end up getting slings and arrows the whole way.”