In all of the early Oscars prognostigating, one film may have been left out of the discussion. Kasi Lemmons’ Whitney Houston biopic I Wanna Dance with Somebody is coming up next month, with Star Wars actress Naomi Ackie as the supremely talented but tragic singer.

Penned by Oscar-nominated writer Anthony McCarten (The Theory of Everything, The Two Popes), the film centers on Houston, who burst onto the scene in the ’80s and captured the hearts of millions with her incomparable voice. But controversy and personal demons dogged her at every turn, and her life was cut short way before its time.

Could we be looking at an Oscar sleeper?  I Wanna Dance with Somebody opens on December 21st, when I expect it will be a huge holiday hit.

I Wanna Dance with Somebody is a powerful and triumphant celebration of the incomparable Whitney Houston. Directed by Kasi Lemmons, written by Academy Award® nominee Anthony McCarten, produced by legendary music executive Clive Davis and starring BAFTA Award® winner Naomi Ackie, the film is a no-holds-barred portrait of the complex and multifaceted woman behind The Voice. From New Jersey choir girl to one of the best-selling and most awarded recording artists of all time, audiences are taken on an inspirational, poignant—and so emotional—journey through Houston’s trailblazing life and career, with show-stopping performances and a soundtrack of the icon’s most beloved hits as you’ve never heard them before. Don’t you wanna dance? Review: ‘I Wanna Dance With Somebody’

‘I Wanna Dance With Somebody’ Trailer: The Whitney Houston Biopic Gets... 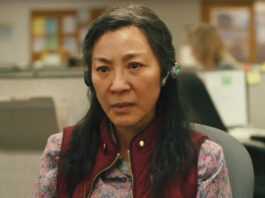