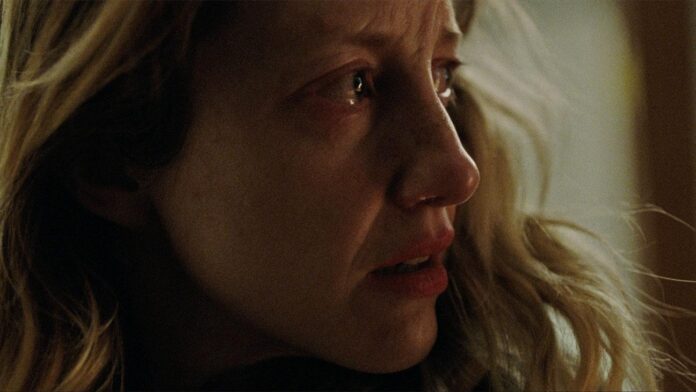 The opening title sequence of Michael Morris’ quiet, understated gem To Leslie does what other filmmakers would waste 20+ minutes explaining. A series of photos feature a young Leslie (Andrea Riseborough) at that point in her life when the future seems to bright. The world is her oyster. We see her at prom, we see her some years later carrying her newborn son, James (later played by Owen Teague), and then there’s footage. Local TV news footage of Leslie on the day she hit the lotto. Over $190K richer, Leslie is asked what she plans to do with all of that loot.

“I don’t know, maybe buy a house, get something nice for my boy…just have a better life!”

Director Michael Morris snap cuts us to the present, six years later. It’s a jarring transition but an apt one. Morris wants us to feel the disorientation that must be filling Leslie’s headspace when she thinks about where her life went. That carefree attitude gone, the money also flushed away by hard partying, bad men, and of course, alcohol. When we first meet Leslie she’s being booted out of a shitty apartment for failing to pay the rent. The neighbors look at her like she’s a pathetic waste. They aren’t completely wrong.

What’s fascinating about To Leslie and Riseborough’s devastatingly effective performance, is that there are so many layers to it. Leslie meekly makes her way around town, both embarrassed to be seen and resentful that people aren’t paying her attention. Homeless, she reconnects with her son James, who is understandably wary of the situation. He knows his mother all too well. He warns her about his neighbors, warns them to stay away from her, and gives her just one rule: no drinking. She can’t hack it.

But we also see how an entire community can make a sick person like Leslie’s attempt at a comeback nearly impossible. Everyone is against her, and this being a small Texas town, it’s impossible to escape their constant criticism. It’s like Leslie’s failure was a personal insult to them all. Leslie feels all of that shame projected onto her, and while she acts defiant we can see in her face how much it hurts. She’s lost everything. Biker friends Dutch (Stephen Root) and Nancy (Allison Janney) seem to relish in her suffering.

What To Leslie doesn’t do is beg you to sympathize with Leslie. Riseborough’s performance forces you to look at Leslie from all angles, from the bankrupt lotto winner to the abandoned mother to the town pariah. Sometimes she can be quite pitiful, throwing herself at any man in the bar like a floozy. But she wants to get better; all she needs is for someone in this town to help her. Fortunately, she finds that with the compassionate Sweeney (Marc Maron), who offers her a job as a motel maid.

The film shifts into a romance from this point on, with Sweeney there to lift Leslie up when she stumbles, which is often, and to protect her from the town’s venom. This aspect of the film is the one thing that didn’t feel genuine, as Sweeney is a little too perfect and hastens a too-neat conclusion for Leslie when nothing about her story is tidy at all. But there’s no overstating how tremendous Riseborough is, ranking right up there with some of the best performances in alcoholism dramas ever, or the film’s compassion for those suffering from this illness.

To Leslie is in theaters now.