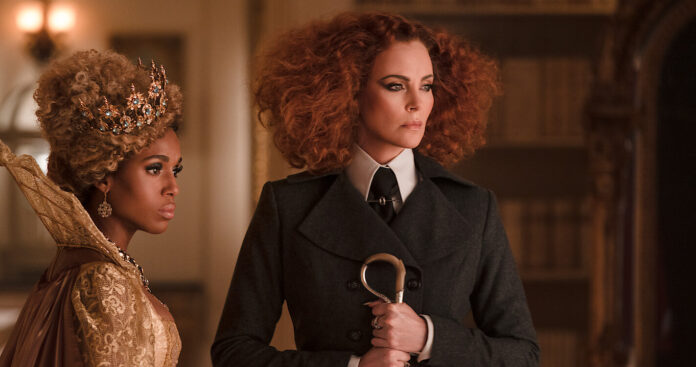 It’s hard to make a global phenomenon on the par of Harry Potter. While there have been many copycats over the years, few have connected on that same magical level where book and screen adaptation are both massively popular successes.  Well, there’s a new example of that difficulty in Paul Feig’s The School for Good & Evil, based on Soman Chainani’s books which are basically Harry Potter with aspiring fairy tale characters. But this sad, overlong, and unremarkable film doesn’t even rate on the same level as Sky High. If you want to watch kids with cool powers mill around school discovering who they are, watch that instead.

Whoever cast the torturous spell that conjured this 148-minute disaster needs to have their wand taken away. The film takes quite a circuitous route to ultimately achieve the lesson to “not judge a book by its cover”, but that is really the only lesson it has to impart. There’s so much going on in this convoluted mess it’s as if Feig and writer David Magee are trying to cram the entirety of Chainani’s franchise into one movie. Perhaps the move to Netflix, after Universal gave up on the adaptation, loosened the creative reins but this film is in desperate need of some decluttering magic.

While there’s a star-studded cast slumming it as various supporting characters in circus get-ups, the actual protagonists are Sophie (Sophia Anne Caruso) and Agatha (Sofia Wylie). These besties couldn’t be more different; Sophie is prim, proper, and outgoing, every bit the fairy tale princess she appears to be. Agatha is all goth-girl energy, with big hair and black clothing to go with it. That’s why they are shocked when Sophie is selected by a giant sorting bird (a sorting hat was taken) to join the school for evil, and Agatha the school for good. So what the students at this fantasy institution actually learn? How to be good fairy tale heroes, princes and princesses, or evil villains who poison apples and cook little children into pies.

On the surface, The School for Good & Evil should be a snap. You’ve got Charlize Theron, Michelle Yeoh, Kerry Washington, Rachel Bloom, Laurence Fishburne, the queen herself Cate Blanchett narrating, and many more in a stacked cast having what should’ve been an awesome time playing colorful storybook characters. But none of them actually seem to be having that much fun, probably because the story labors to do much other than hammer the audience with meta context. So the heroic princes aren’t so heroic, the evil villains aren’t so evil, and nothing is ever as black & white as the lore instills in us. Meanwhile, there are obvious Potter tropes that must be adhered to. There’s a deep, dark villain who shall not be named and looms over the school like a black cloud. His backstory spelled out in a grueling prelude that seems to be setting up the next ten movies. There are boys to hook up with, of course: one actually named Charming who turns out to be a wimp, and King Arthur’s handsome son Tedros (Jamie Flatters) who might actually be a pretty good egg.

None of it feels fresh or especially clever, made worse by this being the least funny thing Feig has ever done. Storybook lore has been deconstructed successfully quite often, whether it be in comic book form (Fables), on the big screen (Enchanted) or the small (Once Upon a Time), but The School for Good & Evil adds nothing new to the equation. An LGBTQ-friendly twist on a key fairy tale cliche is a nice touch, even if it’s still too little too late.

The School for Good & Evil is streaming on Netflix now.