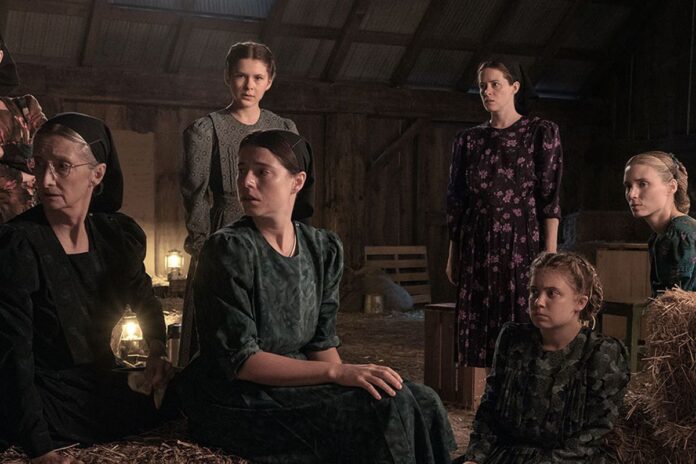 In Women Talking, three generations of women from three different families meet in the hayloft of an old barn. They have been elected by the other women in the colony to determine one of three things: to take the children and leave the community, to stay and fight the men who for years raped them and their children using cow tranquilizer and lied about it, or to stay and forgive them so they can all go to heaven. They have two days to make a decision while all men are in the city to bail the rapists out of jail.

Most of the women in the colony want to either stay and fight or leave altogether, a fact that angers Scarface Jans (Frances McDormand) who’s determined to achieve salvation for herself and her family. She leaves the barn early on with her daughter and granddaughter, leaving Agata (Judith Ivey), her daughters Ona (Rooney Mara) and Salome (Claire Foy), her granddaughter Neitje (Liv McNeil), and Greta (Shelia McCarthy), her daughters Mariche (Jessie Buckley) and Mejal (Michelle McLeod), and Mariche’s daughter Autje (Kate Hallett). Documenting the discussion is August, the community’s schoolteacher who was excommunicated from the colony only to be brought back to teach the boys.

Based on the 2018 book of the same name by Miriam Toews, Polley establishes early on that Women Talking is a work of fiction. Since her last film in 2012, she has worked in television, mainly adapting the Margaret Atwood book Alias Grace. Like Atwood, Toews takes real crimes against women and weaves them into a cohesive story. This concept is based on a real Mennonite colony in Bolivia. But more than that, Women Talking reflects current debates that women are having all over the country about their bodies.

All credit to writer and director Sarah Polley, who narratively and visually crafts a story you can’t look away from. After setting up the film’s original conceit, Polley then drops little nuggets about these women and their situation throughout the film. Each one is a little more devastating than the rest. By the time a decision is reached, full scope of what would happen to them if they stayed is fully felt.

While Polley’s opinions on issues raised in the film are clearly more on the liberal side, all sides of debate are covered. Mariche is the one remaining woman who believes the men should be forgiven, arguing that the devil you know is better than the devil you don’t. Buckley’s inner rage is electric, an undercurrent vibrating throughout the discussion.

In general, this cast is one of the best of the year. Foy has a righteous anger as she portrays a mother trying to reconcile what happened to her child. Mara quietly grounds the younger generation of women, asking bigger questions about the ethics of each decision. However Canadian character actresses Judith Ivey and Shelia McCarthy anchor the entire ensemble, each providing an emotional and wise tether to hold onto.

Women Talking shouldn’t be an easy watch. Polley knows just when to deliver a vital gut punch. However, there is a gentleness to the production that sweeps you into this community of women. Sure to be a topic of discussion this Oscar season, Women Talking is a film that stays with you long after you stop talking about it.

Women Talking is to be released on December 2.