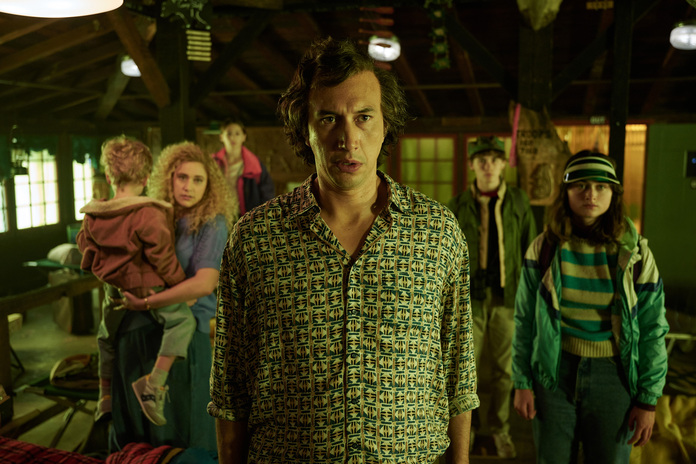 It feels right that Noah Baumbach’s adaptation of Don DeLillo’s “classic” book White Noise should begin with a montage of car crashes. A well-intentioned disaster, Baumbach’s attempt at the “unfilmmable” project can never find its footing, because DeLillo never did, either. A postmodern exploration of our fear of death and the things we do to distract ourselves from inevitable doom, it’s grim and gloomy subject matter clashes with surreal flights of fancy. What is anybody to make of this messy, inconsistent thing that’s more an intriguing failure than anything coming close to a success.

Baumbach is the first director to actually accomplish the foolish mission of adapting White Noise, and it’s clear he has a deep, abiding respect for the source material. I’m not questioning Baumbach’s passion by any means, nor that of his cast who uniformly game to play characters that aren’t really like people but sounding boards for DeLillo’s mania.

Adam Driver and Greta Gerwig as Jack and Babbette Gladney; him a professor in Hitler Studies, her a frizzy-haired physical therapist to geriatrics. Their lives are typical, seemingly boring suburban bliss. He works at the anonymously-titled College On The Hill. The town is getting a spruced-up new A&P grocery store, which to anyone who grew up with those rainbow colored venues they’ll get a nostalgic kick out of seeing it. But all of this easygoing fluff is shattered by a literal big black cloud, an airborne toxic event, that throws the town into a panic.

The threat of this killer cloud gives us the closest look at what Baumbach the horror director might look like. And, frankly, he kinda looks like Tim Burton, with a healthy mix of zany comedy to bolster what should be a frightening sight of fleeing people, auto wreckage, and death. During all of this, Baumbach still manages to find his comfort zone in the dialogue, which is super-intellectual and fast-paced, but also forced. A showdown between Jack and Living Idols professor Murray Siskind the reduces Hitler and Elvis to such a degree that they become the same, is a comedic highlight but also fits unnaturally.

Originally authored in 1985, White Noise‘s sensibilities don’t feel rooted in anything contemporary. The Cold War fear against the “greed is good’ of the Reagan era might have been buzzworthy before, but rings especially hollow and out-of-date now.  Baumbach clearly connects with the material, or perhaps did as a kid, but what does White Noise mean to him right now, and what, if anything, does it say about today? Baumbach has always been able to find some heart and humor beneath the scathing dialogue his characters spew, but when the most rewarding scene is a bravura grocery store dance number over the closing credits, it’s safe to say there isn’t much beneath the noise.