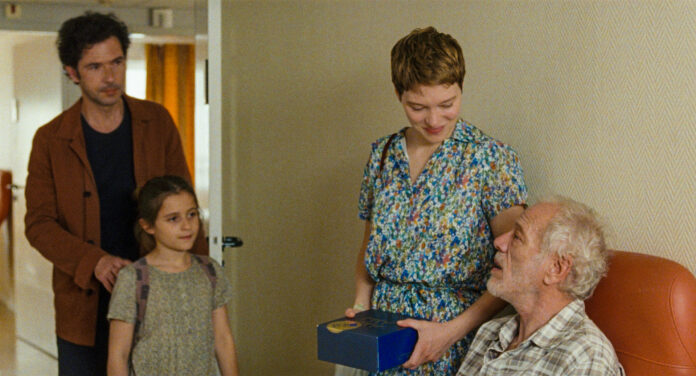 For years, Léa Seydoux has played the complicated girlfriend or muse of the main male character. Fresh off of ending her turn as Madeleine Swann in the James Bond franchise, her next role is the single mother, Sandra, in One Fine Morning. Struggling with motherhood and caring for her elderly father, Sandra – and Seydoux’s performance– grounds the quiet and slight character piece.

One Fine Morning is rooted in reality. Its natural dialogue and subdued performances feel like a snapshot of your own life. When we first meet Sandra, we see her juggle her roles as mother, daughter, and interpreter.  We quietly follow her around as she tries to balance her life. Her father is blind and can no longer live alone, forcing Sandra, her sister, and her mother to find a nursing home for him. With the options expensive and low quality, he father hops between hospitals.

Amidst all this, Sandra runs into an old friend, Clément (Melvil Poupaud) on the street one day. They spend more time together, their attraction to one another eventually leading to a full-blown affair.

Director Mia Hansen-Løve builds tension gradually. While nothing extraordinary happens narratively during the film’s runtime, both Seydoux and Hansen-Løve have the rare ability to make ordinary life cinematic. One Fine Morning sucks you into the minutia of Sandra’s everyday life, making you feel as if you know her, that you could be her friend.

Sandra’s relationship with the married Clément is pivotal to the emotional beats Hansen-Løve is trying to hit. Seydoux and Poupaud have mild chemistry at best. They claim to be passionate about each other but there is an emptiness in Paupaud’s eyes.

There’s nothing special about Clément. Here is this amazing woman who is a wonderful mother, who takes care of her father, and knows three languages, who can’t get enough of this boring man who cheats on his wife and spends weeks away from his son. By the film’s end, we are meant to believe that they belong together. Any messaging Hansen-Løve tries to establish in the film’s first 110 minutes is undone in the last 10. Already 20 minutes too long, the moments when Clément and Sandra are together, the pacing completely slows down.

Seydoux is the reason to keep watching One Fine Morning. Often a pivotal supporting player, Hansen-Løve finally gives the established actress her due, flaws and all.

Mubi has not announced a US release date for One Fine Morning.