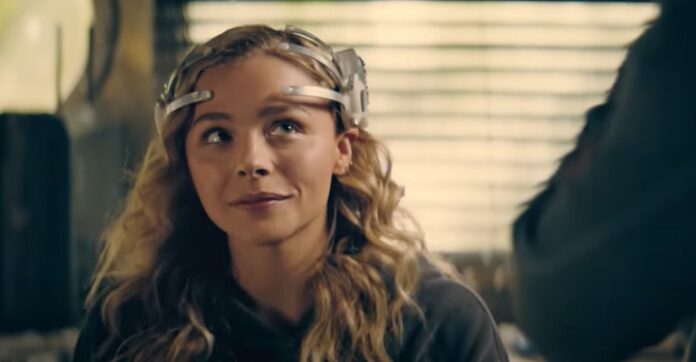 Ok, so here’s what I got out of the trailer for Prime Video’s upcoming show The Peripheral starring Chloe Grace Moretz…take Ready Player One, remove all of the pop culture references, joy, then desaturate the picture and boom, The Peripheral. Ok, so that’s a lazy summary, truthfully the only things they have in common are a bleak future setting and VR.

Honestly, easy jokes aside, The Peripheral looks much more interesting if only for the fact that it seems much more likely in our near future. Moretz plays Flynne Fisher, a young woman trying to make ends meets who works days in a 3D printing shop and nights grinding in Virtual Reality for rich people. Everything changes when she tries out a new VR headset and quickly learns the Virtual Reality London she’s arrived in is light on the V and heavy on the R. I mean, you can already earn money doing grinding tasks for others in MMO’s, so that’s no stretch. The VR tech displayed here is currently available but as sci-fi as it sounds, fully emersive VR that provides neurotic feedback will be a reality sooner or later.

Nerdin’ out aside, I now have one more show to put on my queue. I’ve always been a fan of Moretz, and Jack Reynor (the other feature in this trailer) was stellar in Midsommar and the little seen Free Fire, add to that cast what looks like some solid action, slick cinematography all on a legit sci-fi base, and I’m sold.

Look for The Peripheral season 1 on Prime Video October 21st.

Flynne Fisher lives in the rural American South, working at the local 3D printing shop, while earning much needed extra money playing VR games for rich people. One night she dons a headset and finds herself in futuristic London—a sleek and mysterious world, alluringly different from her own hardscrabble existence. But this isn’t like any game she’s ever played before: Flynne begins to realize it isn’t virtual reality… it’s real. Someone in London, seventy years in the future, has found a way to open a door to Flynne’s world. And as utterly beguiling as London is… it’s also dangerous. As Flynne searches to discover who has connected their worlds, and for what purpose, her presence here sets dangerous forces into motion…forces intent on destroying Flynne and her family in her own world.