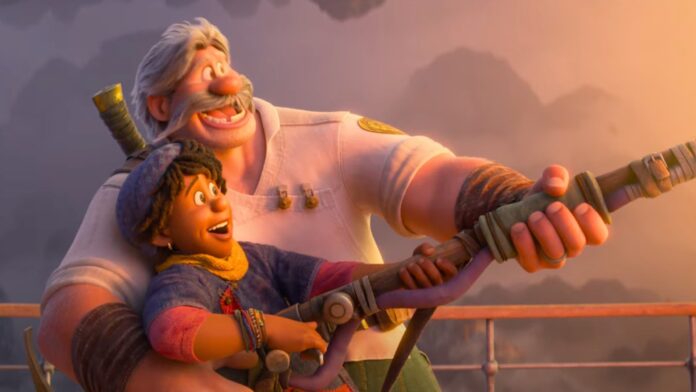 Following on the heels of a trailer released to D23 attendees just days ago, Disney has finally made that footage of its new fully animated sci-fi adventure, Strange World, available to all. The film is inspired by pulpy adventure stories of the past, looking very much like Disney’s take on Lost in Space.

The story penned by writer/co-director Qui Nguyen (Raya and the Last Dragon) follows three generations of the adventure-seeking Clade family, as they try to survive the many dangers of an uncharted alien planet.  Jake Gyllenhaal voices Searcher Clade, who has been living in the shadow of his father, Jaeger (Dennis Quaid) who went missing when he was a boy. Also in the cast are Gabrielle Union as Searcher’s wife, Meridian, and their son Ethan (Jaboukie Young-White). Lucy Liu voices President Callisto Mal, who comes knocking on the Clade’s door asking for aid that will send the family on the adventure of a lifetime.

Oscar-winning Big Hero 6 director Don Hall is aboard this one, and it’s clear he’s pulling from classic sci-fi roots in developing the visuals for this story. This footage gives us a better look at the odd creatures populating the planet, from weird blob-like things to flying jellyfish. And a pink dinosaur. This is the kind of stuff that Marvel fans looking forward to Fantastic Four might want to check out because the vibe is similar.