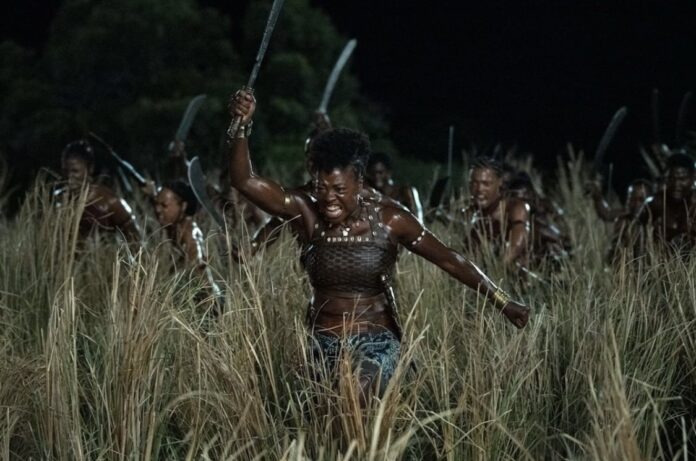 The Woman King is a historical epic that Viola Davis and Maria Bello have been fighting to get made for years. Call it whatever you like, but Hollywood has long been hesitant to invest big money on blockbuster films centered on women of color, especially those without some kind of recognizable brand. Well, maybe it’s the popularity of the Dora Milaje in Black Panther, but Davis and Bello’s passion project is here, an action-packed war movie about the most lethal female fighting force in all of Western Africa. You can tell Davis has put all of her blood, sweat, and tears into it, transforming herself physically to carry it on her newly broad shoulders, and the results have paid off.

In 1823, Nanisca (Davis) leads the powerful Agojie, female soldiers charged with protecting the Kingdom of Dahomey and King Ghezo (John Boyega) from the constant threat of war from other tribes and European slavers. Nanisca is tough, stoic, and a fierce defender but its her compassion that has earned her the respect of the people, and the favor of the King over his many scheming wives. But Nanisca is not alone in this effort. The most intimidating member of the force is Izogie (Lashana Lynch), who is as funny as she is strong, and Nanisca’s loyal advisor Amenza (Sheila Atim), who doesn’t bother mincing words.

The story is pretty straight forward and familiar to other American action movies, and that’s not a complaint. Introduced into this veteran squad is the rebellious trainee Nawi (Thuso Mbedu), who refuses an idle life as someone’s wife. She’d rather fight and fight for something, but she’s also a pain in Nanisca’s ass. Nawi’s arc from hot-headed upstart to reliable warrior is the heart and soul of the film, although it does get sidetracked by a fairly useless romantic subplot involving a European of Dahomey descent (played by Jordan Bolger) who arrives with the other slavers.

The issue of slave-trading is prominent in the film, as well, and presented in a surprisingly complex manner. The capture and selling of slaves is big business, and the Dahomey are not immune to that. All of the warring tribes sell their captive prisoners for profit, and so do the Dahomey. Nanisca, who has tragedy in her past from the slave trades, is firmly against it, while King Ghezo struggles with the morality of it in the face of their profit needs. Screenwriter Dana Stevens, working alongside Bello who developed the story after a visit to Benin, don’t shy away from portraying the differing sides of this debate while keeping mind that this is meant to be an entertaining action movie.

In that regard, The Woman King more than delivers on big, exciting land battles with dozens of Agojie fighting on screen at any time. With the confident, experienced hand of Gina Prince-Bythewood (The Old Guard) at the helm, the film overcomes the restraints of its PG-13 rating to deliver warfare as brutal as we would expect to see from that period. Davis, looking trim and ripped to shreds, is an absolute beast and I hope this isn’t the last time we see her take on a role that demands this much physicality. She’s been edging her way into something like this for a long time and now she should run with it.

The Woman King is seriously entertaining action and packs an emotional punch. Most importantly, it tells a uniquely Black story that has never been told but has long deserved it, and hopefully it will be rewarded with attention from audiences all across the cultural spectrum.

The Woman King opens in theaters on September 16th