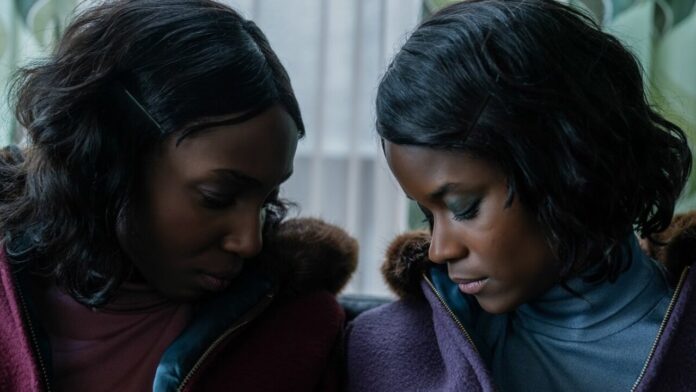 Adapted from Marjorie Wallace’s controversial non-fiction book, The Silent Twins tells the true story of deeply-connected siblings June and Jennifer Gibbons, who refused to speak to anyone but each other for years, developing a language of their own. Together, they crafted wildly imaginative stories and poetry, sinking deeper into their own little world to the exclusion of everyone else, but ultimately society would intrude to tragic results.

Polish director Agnieszka Smoczynska, of the vivid lesbian fairy tale The Lure, paints an evocative picture of the twins’ inner lives, using macabre stop-motion animation sequences, unexpected musical numbers with lyrics from the girls’ writings, and one unforgettable sequence where a man is drowned by a flood of Pepsi. The filmmaker’s enigmatic direction is perfectly suited when capturing the surreal, but struggles to find urgency in the Gibbons’ reality.

June and Jennifer (Letitia Wright and Tamara Lawrence) had one another, and throughout their childhood that’s all they felt was needed. Living with their loving but overwhelmed parents in a small town in Wales, the only Black family in the neighborhood, the sisters would become rebellious teens who acted out against society through petty crimes, drug and alcohol abuse, and eventually imprisonment in a notorious mental facility for an indefinite term.

The Silent Twins never quite finds the right groove to exploring who the “Twinnies” were. The opening scenes, with the sisters played wonderfully and expressively by Leah Mondesir-Simmonds as June and Eva-Arianna Baxter as Jennifer, are appropriately quirky and childlike. But the film only teases at the bullying the girls faced in school, which was largely driven by them being the only Black students in attendane. The film excludes any discussion of race at all, especially in regard to the systemic failures of the British legal, mental health, education, and prison systems. It never escapes the earlier tone which clashes with the extremely grim events that follow. This is not a happy story at all and the film would have been better served by just acknowledging that from the start.

Anything else just feels phony, and there are far too many scenes like that when the Gibbons’ actual story is so compelling and unique. Screenwriter Andrea Seigel had her heart in the right place in wanting to tell the Gibbons sisters’ story. The uncertainty was clear in how much to include, how to tell it, and what to leave in the burn bin. For instance, a latter subplot involving author Marjorie Wallace (Jodhi May) and her attempts to help the twins feels out of place and cliche, while bogging down an already sullen narrative. Sadly, even the sibling rivalry that erupts over Jennifer’s jealousy of June’s writing success is relegated to bursts of violence but little reflection on that violence. The Silent Twins, despite all of its visual splendor and poignant performances by Wright and Lawrence (despite being too old for the teen-era stuff), never goes beyond the surface level.

The Silent Twins opens in theaters on September 16th.

‘The Silent Twins’ Trailer: Letitia Wright And Tamara Lawrance Are Siblings With Their Own Special Language