Home Reviews Khalil Review: ‘The Enforcer’Antonio Banderas Gets His Liam Neeson On As A Miami...
Facebook
Twitter 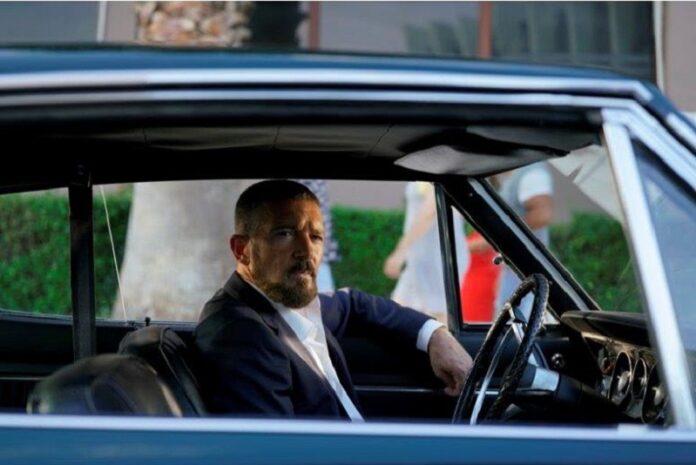 After serving a lengthy prison sentence, Cuda (Antonio Banderas) recently got his freedom. Naturally, he returns to doing the one thing he does well, which is protecting his boss Estelle from the mob (Kate Bosworth). Things initially appear to be fine because he isn’t actually doing anything significant. He must first find the unemployed street fighter Stray (Mojean Aria) so that he can provide muscle for Estelle and maybe step in for Cuda if jail doesn’t restore his fighting spirit. In Richard Hughes’ feature-length directorial debut The Enforcer, Cuda is introduced to us as being just as merciless as he was ten years prior, as we quickly discover.

Cuda is a broken guy, despite being as tough as nails for the sake of his job. He hasn’t seen his sixteen-year-old daughter Lola (Vivian Milkova) since she was much younger, and he is desperate to get in touch with her (thanks to jail and whatnot). She is a regular teenager who does not want anything to do with her father because, well, he is her father and that is what teenagers do, and she also does not want anything to do with her father who was absent because he was arrested for a crime and was sent to jail. His relationship with his ex-wife is no better as she pretty much tells him to leave their daughter alone and doesn’t invite him to Lola’s sweet sixteen.

Cuda still has his paternal instincts even though Lola doesn’t want to interact with him much. He watches Billie (Zolee Griggs), a fifteen-year-old runaway who is arrested for shoplifting, while he is unwinding at a nearby shopping center. He gives the young girl some food and introduces himself after defusing Billie’s conflict with a shop owner. To try and purify his conscience and do the right thing, Cuda places Billie in a motel, pays for her lodging for the week, and gives her a wad of cash. The only drawback for Cuda is that not everyone is as kind to Billie as he is, and she eventually becomes the target of sex traffickers’ stalking and kidnapping. Later, when Cuda goes to check on Billie, he receives the unsettling news that she has vanished without a trace and that there are indications of a struggle.

Cuda and Stray continue grunt work for Estelle and go to collect a payment from a cyber-sex peddler (2 Chainz: yes, the rapper 2 Chainz is a criminal kingpin in The Enforcer) where he discovers that Billie is being held captive along with a bunch of other girls and are pumped full of drugs and force to be cam girls against their will. This doesn’t sit right with Cuda who approaches Estelle for her involvement in such a terrible business. Cuda must choose between tearing down the organization he just served 10 years in prison for over a girl he met recently or looking the other way after realizing his boss is complicit in this type of business practice.

Since everyone anticipates what will happen with Cuda and his decision to atone for his past and save this young child, The Enforcer is very predictable. And in terms of telling this kind of story, which has been done so frequently that it now has its own genre, the movie isn’t doing anything particularly innovative. It’s not exactly clear why the movie needs Stray, played by Mojean Aria, since his major purpose is to be driven and tag along with Cuda. The story wouldn’t have been significantly altered if he hadn’t been in the movie. I like 2 Chainz’s music just as much as the next guy, but he didn’t make a good final boss, particularly in an action movie.

The charm is in Antonio Banderas, who can still get his Desperado on as he kills many thugs by beating and shooting them. He appears to be the lone performer who excels in spite of the clunky script by W. Peter Iliff. Unfortunately, The Enforcer uses tropes that we have seen a hundred times before in better movies, and not even Antonio Banderas can stop the movie from falling victim to its own cliches. Even though it takes some effort to get there, the third act is entertaining.

The Enforcer is currently in theaters and On Demand.