Home Reviews Khalil Review: ‘One Way’Machine Gun Kelly Is On The Run In A Crime...
Facebook
Twitter 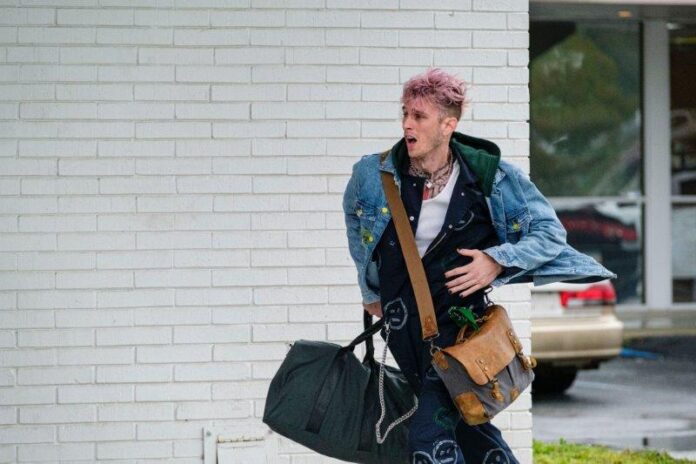 Even though he recently lost his rap battle against Eminem, Machin Gun Kelly, real name Colson Baker, has been steadily advancing his cinematic career. On his resume, Baker has steadily made the switch from “rapper/musician” to “actor.” He initially drew my attention in Bird Box, a Netflix original movie that was a sleeper hit in 2018. He has since appeared in a number of movies, including The King of Staten Island. Now on his 18th movie, Baker stars in Saban Films’ latest crime drama One Way.

The fact that One Way drags the spectator straight into the action is one of its worst shortcomings. It almost feels like the movie starts in the middle of a story’s second act, and we are left wondering what the hell is going on in the film’s narrative. In the opening scene of One Way, Freddy (Baker) is shot in the stomach, estranged from his pals, and carrying a sizable sum of money that is clearly not his. Vic (Sopranos alum Drea de Matteo), the mob boss, is the main bad guy. Vic wants her money back and will stop at nothing to obtain it, even if it means ordering the torture and murder of Freddy’s friends and allies. Freddy boards a Greyhound-style bus after realizing that he might be apprehended. While on the bus, he must not only keep one step ahead of his assailants but also reconsider his life decisions.

Freddy gets aboard the bus and goes to the back to try to treat his injuries. Numerous characters from the bus are briefly presented before being immediately forgotten. Rachel (Storm Reid), a teenage runaway girl who Freddy has to constantly ask what her real age is because she’s obviously underage, is one of the two primary people we encounter on the bus. She is pretty nosy when they first meet, so it’s not entirely clear why Freddy is interested in talking to her, but it’s probably because she makes him think of his daughter, to whom even he freely admits he hasn’t been a good father. The second person we meet is Will (Travis Fimmel), a bus passenger who also shows interest in Rachel. He claims to be a social worker who is watching out for Rachel’s interests. But he seems to be dealing with something more, something deeper and darker. Freddy keeps calling his ex-girlfriend Christine (Megan Holder) to make amends while simultaneously getting her to tend to his gunshot wound (he’s fortunate lucky to have been with and had a child with an actual nurse). He confesses to her that he’s been a poor partner and an even worse father to their small child.

Freddy’s condition begins to deteriorate as One Way goes on. He begins conversing with a phantasm of himself who appears to be from Star Trek’s Mirror Universe (because that dude is evil for no reason). He calls his father, Fred Senior (Kevin Bacon), the only person he knows who has the same blood type as him, after realizing he requires a blood transfusion to survive. The only issue is that they don’t exactly get along. Being a piece of work, Fred Senior doesn’t seem to give his child any thought. In the end, the two spend most of their time squabbling. And there’s a legitimate reason for it—Fred Senior just might not be there to assist his son Freddy.

As One Way draws to a close, Freddy must figure out how to handle the problems that arise on the bus, avoid being apprehended by Vic’s thugs, reconcile with his ex and his child, and somehow prevent bleeding out and passing away before he can escape with the money. Although the movie’s ending is partially foreshadowed, it also offers one or two surprises to help salvage the movie. The cast of One Way is also quite strong, with standout performances from Storm Reid, Travis Fimmel, and Kevin Bacon. Even Baker, who is now a Leading Man but still has a ways to go, gets to perform well.

One Way, on the other hand, seems to be missing half of the movie. Freddy’s theft from Vic: Why? What transpired before the shootout and robbery that left him wounded? Why is he so distant from his ex-wife, his child, and his father? One Way never fully explores these issues, leaving more questions than it does solutions. If the plot didn’t rely on so many crucial story beats that it doesn’t appear to be interested in exploring, this could maybe be excused. Despite some strong performances by an amazing cast, One Way would have been better served if it had a narrative that was determined to tell a whole story.

One Way is currently in theaters and On Demand.