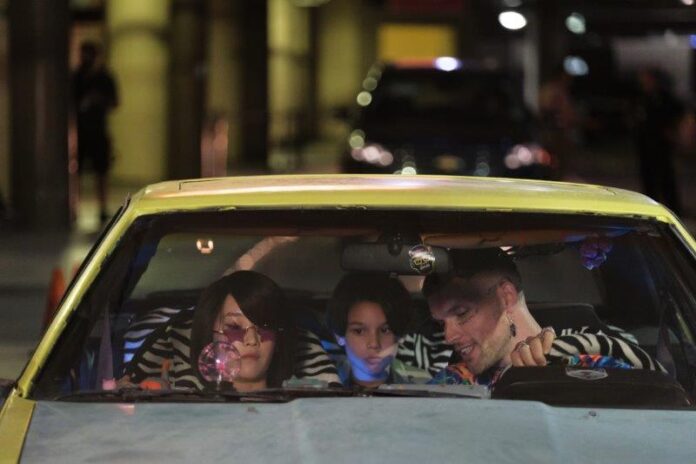 Everyone enjoys claiming that, if they had superpowers, they would use them to fight crime or aid the less fortunate. However, if you had superhuman abilities, you would prioritize protecting persona 0 above all else. Realistically, you would probably use any special powers for yourself because we live in an individualistic and capitalistic world, and you constantly need to make sure that you have the essential resources for yourself. That’s precisely what Mona Lisa and the Blood Moon, the latest film by A Girl Walks Home Alone at Night filmmaker Ana Lily Amirpour, examines.

After spending the majority of her life in a mental hospital in New Orleans, Mona Lisa (Jeon Jong-seo) ultimately makes the decision that she no longer wants to be there. Now us regular people would have to demonstrate that we are mentally capable of caring for ourselves and would be considered mentally sound to return to the outer world after several assessments. Naturally, telekinesis cannot be used to manipulate human beings. And wow, can Mona Lisa do it with the ugliest of methods! She manages to get out, and for the first time in a very long time, she is outside. Mona Lisa, who speaks only rudimentary English, wanders the streets until she encounters various members of the New Orleans nightlife. Street hustler Fuzz (Ed Skrein) the first person she encounters, is just attracted to her and wants to go wherever the night takes them. They “kind of” hit it off, but she leaves him to wander the streets by herself. She chances to cross paths with Police Officer Harold (Craig Robinson), who first tries to assist her before she uses her powers to hurt him, causing him to shoot himself in the head with his own gun. This puts her on Officer Harold’s radar, and he’s determined to figure out what’s going on.

She meets Bonnie (Kate Hudson), a struggling exotic dancer, in a nearby restaurant as she draws the attention of a jealous woman’s boyfriend. Bonnie is tragically being jumped by the jealous woman. As she is being assaulted while on the ground, Mona Lisa steps in and uses her abilities to make the attacker begin attacking herself. While most of us would be grateful if someone telekinetically saves us from a trip to the ICU, Bonnie sees Mona Lisa as a possible side hustle. Bonnie befriends Mona Lisa and begins their own two-person criminal rampage throughout the city. They initially only have Mona Lisa order strip club visitors to hand over all of their hard-earned cash to Bonnie, which infuriates both the customers (who at first refused to pay Bonnie) and the other exotic dancers who are now unable to receive tips of their own. They quickly graduate their criminal activities to accost people who use the ATMs in New Orleans in addition to their strip club hustle, making them empty their bank accounts and surrender their money to Bonnie.

It is obvious that Bonnie is utilizing Mona Lisa for her own purposes in order to avoid having to struggle as much. But this arrangement also benefits Mona Lisa in some way. Along with having a place to stay, Mona Lisa becomes close friends with Charlie, Bonnie’s young son Charlie (Evan Whitten). Charlie doesn’t like his mother much, and it appears that neither does she. As a result, the plot of Mona Lisa and the Blood Moon shifts from being about two criminals committing crimes to being about a wayward soul becoming friends with another wayward soul since Charlie and Mona Lisa both want to leave Bonnie alone.

Bonnie’s evil deeds are also starting to catch up with her, which is unfortunate. Officer Harold is still piecing the puzzle together and trying to find or stop Mona Lisa. The plot of Mona Lisa and the Blood Moon soon shifts into a cat-and-mouse game as Mona Lisa must outrun Officer Harold as he begins to unravel the mystery and close in on her. Will Mona Lisa succeed in escaping, or will she be apprehended and returned to the mental hospital?

The movie Mona Lisa and the Blood Moon is incredibly captivating all around. The fact that the movie was filmed on location in New Orleans is one factor that stands out. In a movie set in the Crescent City, Bourbon Street would often be prominently featured in almost every scene to promote travel to the real-life locale. Although we get to see several facets of the city that are frequently absent from pop culture, New Orleans itself seems to be a significant character in the movie. Generally speaking, the cast does a good job onstage. Given that he spends most of his time in the background, Craig Robinson appears to be underutilized. Due to her character’s limited language and lack of dialogue, Jun Jong-seo must rely heavily on her nonverbal acting, particularly her use of her eyes, to make an impact. Even though Kate Hudson is the star of Mona Lisa and the Blood Moon and receives top billing, she frequently feels out of place. She may play what amounts to a bad person since we are unfamiliar with her in that type of role, yet she still performs well.

The question is never truly properly addressed, despite the fact that the director Ana Lily Amirpour keeps using the cinematography of a “blood moon” throughout the movie. Is Mona Lisa a supernatural or mutant being, or is there some unusual sorcery at work here? That is primarily for the purpose of setting up a visual background for the movie’s title and is never truly addressed. The title actually doesn’t make any sense without addressing that key topic, thus it feels like a missed opportunity. The movie is incredibly interesting and intriguing because it showcases the city of New Orleans and has a distinctive noir flavor while dealing with superpowers at the same time.

Mona Lisa and the Blood Moon is currently in theaters and On Demand.