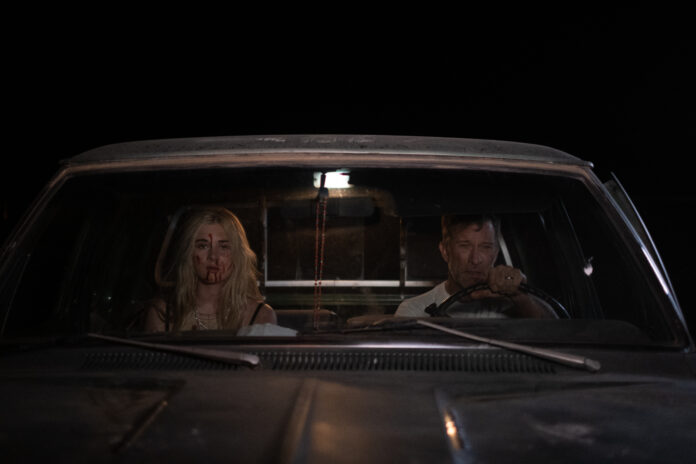 Scott (Thomas Jane), Linda (Ashleigh Domangue), and Jane (Harlow Jane) Brennan were a typical family. Just like that, one night where a teenage daughter is out too late changed their lives forever in Dig. On the way home from interrupting Jane’s curfew defying partying, Scott gets into a road rage incident. When the dust settles, Linda had been killed and Jane’s hearing is nearly gone. Now a year later and Scott is still trying to pick up the pieces. Jane’s hearing hasn’t improved, but Scott is holding out hope that a cochlear implant will improve it. Granted the $30,000 for the procedures seems like a pipe dream.

Enter Vic (Emile Hirsch). Vic wants to hire Scott to strip a house down. He feeds Scott a story about a divorce and tells him “his friend” needs the job done that weekend. He makes it easy for Scott by already listing out all the digging tools he’d need. However, with red flags and alarm bells galore, Scott is quick to turn the job down. That is until Vic pulls out stacks of cold hard cash. With Jane’s potential surgery in mind, Scott can’t turn down that kind of money. 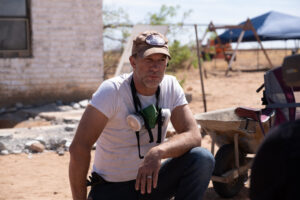 Scott, Jane, and his employee Pablo (Arthur Rodriguez) head to the address to get the job done. To recap – weird stranger paying over market value in cash…check. Needs it done right away…check. Fishy backstory about why he needs you and what you’re doing…check. Remote lot with no one around…check. POS house filled with worthless stuff that no one would bother to pay to salvage…check. Yeah, this is going to go well. Before long Vic and his literal and figurative partner-in-crime Lola (Liana Liberato) show up and try a different approach. They bust out guns and demand that Scott digs up something important to them. That is unless he wants to lose a wife and a daughter. 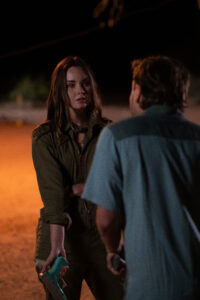 There were aspects of Dig that play fairly well. The acting was a bright spot. With a very minimal set and cast, it was important that everyone was up to the challenge. We see two extremely different relationships throughout the film. Hirsch and Liberato’s banter and chemistry certainly stood out. They both play ludicrous characters that are almost caricatures but manage to toe the line between humor and absurdity. With it being the Ablakhad’s first script, they successfully created enjoyable, yet ridiculous dialogue for Hirsch and Liberato until the wheels completely come off. Unfortunately, the rest of the script left a lot to be desired. Dig is the first project where Thomas Jane has acted opposite his real-life daughter Harlow. Their connection noticeably translated to the screen, managing to overcome subpar and at times outright cheesy and unrealistic dialogue.

From the direction itself to character’s actions and thought processes in the film, there were head scratching decisions galore. Levin attempted to channel his favorite 70s filmmakers in Dig. He states he was trying to capture Eastwood’s “minimalistic, desert noir, landscapes” along with Scorsese’s “visceral camera work.” Combining those elements with the “brutal violence and cruelty of dialogue” found in films by Walter Hill and William Friedkin. While an admirable effort, the film falls short. The result is muted colors, an overreliance on continuous repeated imagery, and questionable camera angles.

Then there was the score. Levin and editor Marc Fusco made the conscious decision to  “juxtapose the tough material” purposefully “creating an unrelenting feel.” What we get are music choices that completely destroy any atmosphere established in scenes. Coupled with transitions from music to silence that are so jarring they become the most memorable aspect of the film. Dig had the potential to be much better than it was. Strong performances are wasted and the film ultimately doesn’t deliver. Dig’s short runtime, pace, and certain elements of the script make it a decent watch, but there are much better options out there.