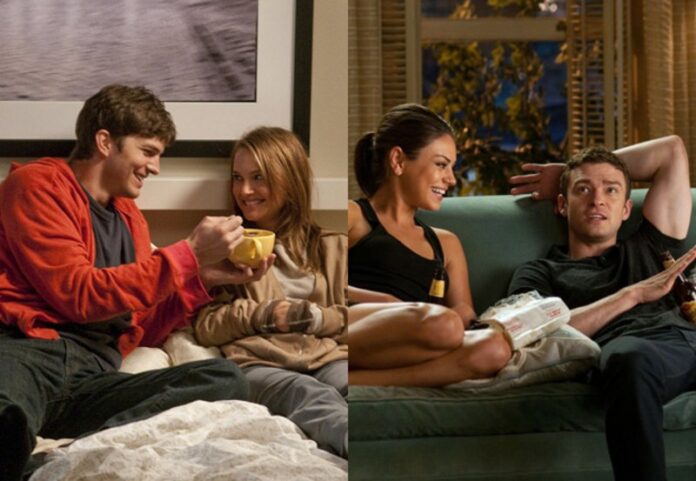 We joke that there are no original ideas in Hollywood. When someone makes a blockbuster hit, there are a dozen studios looking to copy that same formula, sometimes to a startlingly similar degree. Rom-com fans were faced with such a thing in 2011 when two movies had exactly the same plot: two friends who become friends with benefits, and then, *shocker*, they fall in love. On the low, I think we all knew that No Strings Attached and Friends with Benefits were the same damn movie. But now it’s just nice to hear two of the stars actually admit it.

Natalie Portman joined her No Strings Attached co-star Ashton Kutcher for his Peloton exercise series, “Our Future Selves“, and they talked about the fact that they basically made the exact same movie as Kutcher’s eventual wife, Mila Kunis…

“I think the first time we really started hanging out is when we shot ‘No Strings’ together”, Kutcher said while plugging away on his Peloton treadmill.

Portman responded, “Who would’ve thought 20 years later, we’d be on a Peloton together?”

Okay, so again, the film was released in 2011 so perhaps Portman has sunk so deep into the cult of Peloton she can’t tell the passage of time anymore.

“Yes, and Mila and I had just shot ‘Black Swan’ together right before,” Portman added. “So we were all making out with each other.”

Friends with Benefits paired Kunis up with Justin Timberlake, who to the best of my knowledge has not made out with Ashton Kutcher, but feel free to correct me on that.

Neither of these movies is interesting enough to warrant a rewatch. Their only real claim to fame is that they are virtually identical, and if you swapped the stars absolutely nothing about them would be any different.