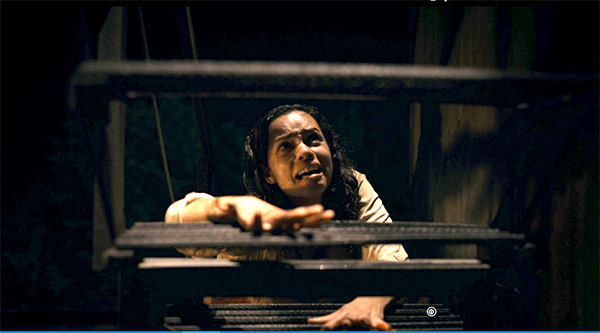 Vacations gone wrong, home invasion thrillers, these are just a couple of the horror hallmarks toyed with initially in Zach Cregger’s Barbarian. But this is only the beginning. By the time the film is through putting the audience through its paces, many different styles will have helped ramp up the tension, from ’80s-style slasher to a relentless found-found-esque chase. While it doesn’t all come together in the end, the journey is clever and frequently terrifying, and more than worth taking.

Set in the most rundown part of Detroit imaginable, Barbarian stars Georgina Campbell as Tess. She arrives in the dead of night in the pouring rain at the Airbnb she’s rented out. There’s a problem, though. The place has been double-booked, and the sweet, gentlemanly (too gentlemanly?) Keith is only too eager for her to stay over. This probably wouldn’t be so bad if Keith wasn’t played by Bill Skarsgard, ol’ Pennywise the Clown himself. We’re trained to fear him, his pale skin, and alien eyes immediately on sight. But Keith is just so darn charming, and Tess, who is rightfully concerned about staying in a house with a strange dude, eventually gives in. Plus, the two find they actually share quite a lot in common.

Cregger, unbelievably a member of the Whitest Kids U Know comedy troupe, shows he’s really good at using humor, specifically the awkwardness of Tess and Keith’s situation, to build a Hitchcockian-style potboiler. First and foremost, nothing in the early stages is unrealistic, and that includes the choices both characters make. Sure, if any of us were in Tess’ shoes we’d probably run in the opposite direction. But that’s just what we tell ourselves. In reality, we’d be as put-out as she was and look for any excuse to not have to go searching for a hotel room in the middle of the night. Even as she agrees to stay, Tess is no moron. She gets the deets on Keith, and later when it’s her who actually scares the shit out of him, his response is justifiably pissy. But we’re not stupid. We know something bad is going to eventually happen, pleasantries aside. There’s always something that keeps Tess where she’s at, and all of them are plausible. It soon begins to feel like Detroit itself is a prison, something I’m sure some of the poor citizens who grew up in that downtrodden, failed city must feel.

Barbarian takes a turn for the ambitious when Tess discovers a secret room deep in the walls of the basement. Without giving anything away for fear of ruining the movie’s greatest aspect, its unpredictability, Cregger introduces elements that grow increasingly implausible until Barbarian no longer resembles the movie we started out with. The slow burn of the first act gives way to a furious assault of claustrophobic terror, which then throws you off-balance by introducing a completely different, but no-less-disturbing genre element. These changes occur out of nowhere, including one that utterly disrupts everything we were expecting the movie to be. Later, as these changes begin to pile up, we can’t help but wish that more time could’ve been spent fleshing them out. They begin to feel like a director showing off what he can do, rather than telling a complete story. For instance, Justin Long enters the film much later on as AJ, an actor whose career has been suddenly thrown into upheaval due to alleged indiscretions. There’s a lot that can be done with that, especially in this genre, but his story takes the cheapest route possible.

That said, Barbarian is adept at keeping us on our toes. The small but talented cast contributes to this greatly. Campbell, best known for an episode of Black Mirror and the Krypton television series, gets the most to do as Tess often defies our expectations for horror characters. She doesn’t always take the easiest route to a certain doom, and she feels like more of an outside-the-box character than these films typically offer. Skarsgard is forever an actor whose characters we will look at with suspicion. That’s a credit to him, but also a hurdle for him to overcome. He has to work at making Keith someone we want to trust, but more importantly, someone we can see others putting their trust in. Skarsgard succeeds here, and it’s safe to say this is one of the more surprising roles he’s had.

Ultimately, Barbarian is a film that takes some big swings and connects more often than not. Setting it in Detroit, a place where society has broken down to such an extent that its people are sure to follow, was a brilliant choice. The societal rot is a perfect metaphor for the darkness that we all fight to stamp down. Barbarian is the kind of horror that will work best in a crowded theater full of anxious onlookers who will never see what’s coming.