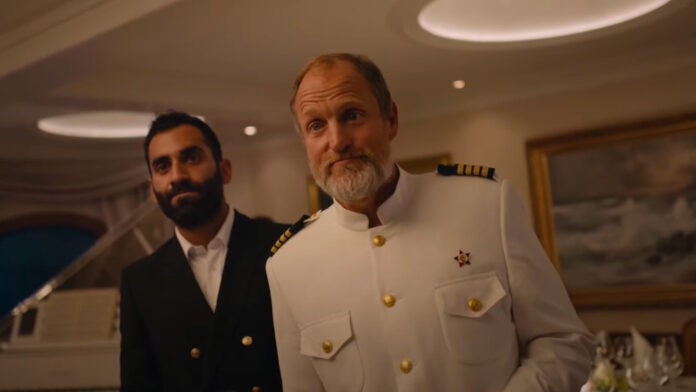 With the Cannes Jury Prize-winning Force Majeure and 2017’s Palme d’Or winner The Square to his credit, Ruben Ostlund established himself as one of the top directors in the world. And that was before he won his second Palme d’Or earlier this year at Cannes with Triangle of Sadness. The number of directors who have won that award twice? Seven. In short, Ostlund is a filmmaker whose scathing satires of the elite and masculinity are always a must-see.

Triangle of Sadness could be seen as a thematic continuation of Ostlund’s prior films, as it explores the world of fashion and our idea of what makes a man. The film stars Woody Harrelson, along with red-hot Harris Dickinson (The Souvenir Part II, The Kings’s Man), along with South African actress and model Charlbi Dean.

Here’s the synopsis: Set in the world of world fashion – a satire in which a pair of models find themselves at a crossroads in their careers. Fashion model couple Carl and Yaya are invited on a luxury cruise. When the yacht sinks they become stranded on a desert island with a group of billionaires and a cleaning lady. In the fight for survival, old hierarchies are turned upside down since the cleaning lady is the only one who knows how to fish.

Neon will drop Triangle of Sadness into theaters on October 7th.