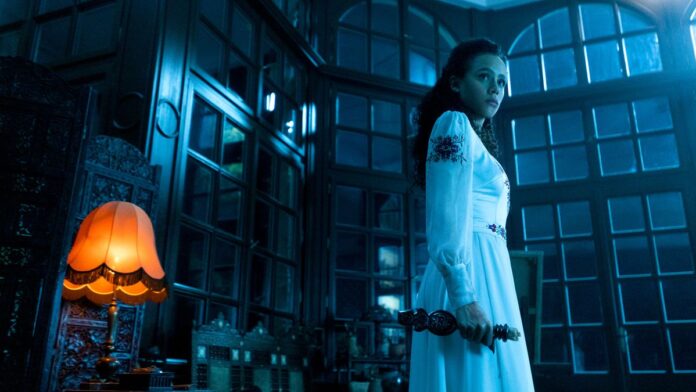 What happens when street smarts meets palace intrigue? Not a Hell of a lot in Jessica M. Thompson’s dull blue-blood horror film The Invitation. Nathalie Emmanuel deserves better than her role as Evelyn, a savvy New York girl just trying to make it in the big city following the deaths of her parents. She makes due as wait staff for a caterer, but she’s desperately lonely and in need of family, which is the only excuse for the string of ridiculously dumb decisions she makes that keep this absurd yet surprisingly dry film going for longer than it has any business.

It’s not inherently dumb to indulge in one of those Ancestry.com-like DNA tests, but it sets off a chain of stupid events. Despite being warned by her best buddy that it’s a bad idea, Evelyn goes to meet Oliver Alexander (Hugh Skinner), the exceedingly British and very-white cousin she never knew she had. Evelyn discovers that she is actually part of a royal dynasty of sorts, monied old people who live in posh castles and who give each other titles like “Lord” and “Lady”. Basically, she’s stumbled into the most unlikely episode of Downton Abbey ever. Her next mistake? Taking Oliver up on an offer to attend a marriage at the family castle across the pond, where she can be the darkest person there who isn’t one of the help. Despite her New York smarts that should have warned her this was a terrible idea, she does it anyway.

Right away, it goes wrong. Sean Pertwee is perfectly-cast as the commanding, rude head butler who scolds the wait staff and treats Evelyn, er Evie as she likes to be called, like the outsider that she is. But there is a good thing. Walt (Thomas Doherty), the poised head of the estate, is very handsome. He stands out amongst the crowd of old white fogeys. To us, he’s instantly dangerous. To Evie, everything’s okay. Nevermind the barred windows, mysterious disappearances, wickedly evil kin, horrific visions. It’s all so silly you wish it could’ve been more fun.

Instead, The Invitation plods along before finally getting to what has become obvious: Evie’s new family does not have her best interests at heart. The only blood they’re interested in is devouring hers, as they turn out to be a coven of vampires who can walk around in the daylight. The reasons for this are dismissed out of hand when they really need further explanation, but this isn’t the sort of film that dwells on the details.  And after nearly an hour of nothing happening it’s probably a small mercy that they don’t fall into exposition.

Emmanuel is a talented, stunningly gorgeous actress who has shown she’s capable of more in films such as Army of Thieves and her quietly smoldering performances on Game of Thrones. But she’s not given much to work with in The Invitation, and her turn in the final act to fight back in Samara Weaving-esque fashion never reaches the over-the-top heights we want such payback to be. Her casting is spot-on, though, as she’s perfect when the film makes allusions to the racial, cultural, and class divisions. She’s got just the right amount of New York snark when it’s suggested someone like her being invited into their midst is “more than a leg up”. It’s at moments like this when Emmanuel seems just angry enough to bite their heads off, which is the appropriate feeling to have. Too bad she doesn’t have this kind of fire all along, because The Invitation needed something to inject some life into it.

The Invitation is in theaters now.

‘Die Hart’ Trailer: Kevin Hart Gets Schooled By John Travolta In How To Be An Action Star