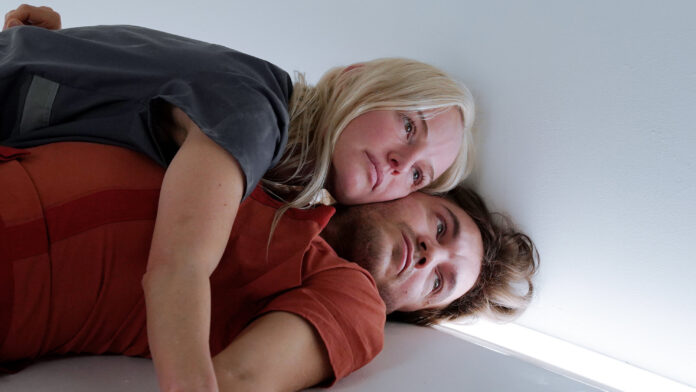 Sharing a small space with your partner for an extended amount of time may sound familiar for those coming out of quarantine. Divorce rates rose after the pandemic where the close proximity and constant contact left couples pondering their marriages and life choices. Those ideas are explored in director Mukunda Michael Dewil’s thriller, The Immaculate Room.

Kate Bosworth and Emile Hirsch play Kate and Mikey, respectively, a couple excited to spend the next 50 nights inside a minimalistic white room. If they succeed in this experiment, they will receive $5 million. Their days are predetermined, with the lights mimicking the outside world. They have a bed and a bench, but that is pretty much it. Prepackaged odorless liquid labeled “food” is delivered to them during meal times. They are given a blank canvas to scientifically prove their relationship is solid.

For the first half of their confinement, Kate and Mikey are able to cohabitate peacefully. We get to know that Kate is more type A through her daily affirmation and meditations. Her partner is more free-spirited, running laps and dreaming of using his half of the money to hang out with Elon Musk. Their relationship is tested, as it always is, by a bug appearing in the middle of the room. These challenges, fabricated and otherwise, are sandwiched between long discussions about privilege, art, grief, and compassion. When a third person (Ashley Green) is introduced as a “treat” for the couple, their relationship challenged to the fullest.

It’s safe to say this sci-fi, dystopian thriller is grounded. It’s not flashy and snarky the way Spiderhead was earlier this year. There is a Black Mirror feel to the concept and execution as we aren’t shown the mysterious scientist for the majority of the movie. But there is a large disconnect between what Dewil is trying to say and how he executed it.

Dewil injects his characters with great philosophical ideas and opinions without fleshing out their backstories to explain their psychology. One shouldn’t leave a two-handed film and feel as though they don’t know the characters. Hirsch and Bosworth do their best with Dewil’s script, but their lackluster chemistry gives away the character’s lack of foundation from the get-go.

Dewil uses the titular “immaculate room” as an obvious metaphor for the couple themselves. It actually works better when compared to the film – a space that held much potential, with little there to begin with.

The Immaculate Room is available in theaters and VOD now.