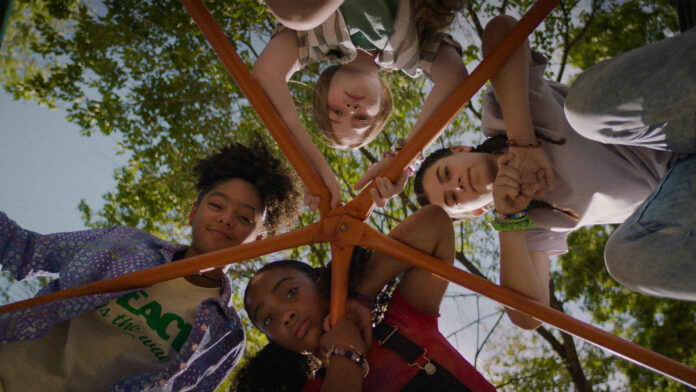 *NOTE: A version of this review was originally part of our Sundance Film Festival coverage. Summering opens in theaters on August 12th.*

I’m a huge fan of James Ponsoldt, and in a lot of ways he helped define the overall Sundance experience I’ve had over the last decade. He released a trio of personal favorite films in Park City in rapid succession: Smashed, The Spectacular Now, and The End of the Tour, all hugely entertaining, thought-provoking films that never forgot to tell an engaging story. Then came his one big studio effort, starry, unfortunate thriller The Circle, and Ponsoldt went away for a while. And now he’s back with Summering, a female-fronted coming-of-age story that leans heavy on predecessors such as Now and Then or Stand by Me.

And those are terrific influences for Ponsoldt to pick from, however there’s not much to Summering at all. Strangely co-written by two men, Ponsoldt and Benjamin Percy, the film treks in that period before teenage angst has fully set in, and some of the childhood wonder still remains. Four tween girls, Dina, Lola, Daisy, and Mari (played by relative unknowns Lia Barnett, Madalen Mills, Eden Grace Redfield, and Sanai Victoria) bound carefree and unrestrained (they literally take flight), soaking in the last rays of summer before heading off to the wild unknown of middle school. If anything, these opening moments capture a certain untamed spirit that I wished had carried on throughout.

Unfortunately, when what passes for a plot takes shape, Summering‘s weaknesses are unavoidable. Time spent laughing and talking the way girls do about the future give way to something darker. They discover the dead body of a well-dressed man lying in the woods, a possible jumper from a nearby bridge. Rather than doing the logical thing, which is call the cops or tell their parents, the girls decide they don’t want to deal with the hassle that would bring. So they decide to try and figure out for themselves who this man was and why he died, for reasons that remain at a distance.

Naturally, this exercise leads to profound discoveries, not about the corpse but about the girls as they begin to make that transition into womanhood. And a big part of forming their identity is how they relate to their mothers. Ponsoldt calls in some big names to fill the adult roles: Lake Bell, Megan Mullally, Ashley Madekwe, and comedian Sarah Cooper in what will be the first time many will see her as a dramatic actress. Chemistry between the actors varies wildly. Bell is quite good and typically expressive as Daisy’s alcoholic mother, a cop barely holding it together if not for her daughter’s care. The other relationships are less defined, but Mullally, Cooper, and Madekwe make the most of limited screen time.

In speaking with Ponsoldt about Summering, he said this was a movie he wanted to make for the women in his life, recognizing that films like this are nearly always seen from the male point of view. His enthusiasm and good intentions aside, the film is hurt by a lack of narrative drive and questionable casting. The young actresses show individual promise but as a group they don’t click in any way that feels natural. For a drama largely grounded by heavy real-life issues, fantastical elements feel out-of-step, as if put there to spice up a shallow story with few revelations.

There are certainly worse films out there than Summering, and worse that fall into the coming-of-age field, too. And while Ponsoldt can be commended for the film he wanted to make, the actual result falls short. He’s still a tremendous filmmaker and there will be other projects better suited to his skills than this.

Be sure to check out my interview with James Ponsoldt about Summering right here!