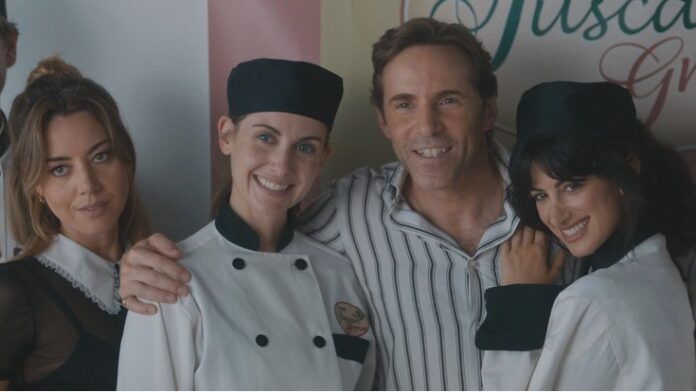 Alison Brie and her director/husband Jeff Baena thrive at making movies that are…well, misshapen. The filmmaker behind enigmatic curiosities such as Horse Girl, The Little Hours, and breakout Life After Beth, delivers another with Spin Me Round. On paper, it’s the story of a workaholic middle-manager at Tuscan Grove, an Olive Garden-esque Italian restaurant who finds potential romance and a great deal of mystery while exploring Italy. If that were all it was this might have been something of a low-stakes charmer, but Baena, who also co-wrote the script with Brie, takes this one out of the oven a bit early, leaving a doughy mess.

Brie stars as Amber, who has been stuck in a rut for seemingly her entire life, having never left the confines of Bakersfield, CA. The chance to expand her horizons arrives when her boss (Lil Rel Howery in a role so profoundly beneath him) signs her up for a corporate retreat to Tuscany for some teambuilding or whatever. She’s naturally very excited to get away from the restaurant and watching bags of sticky alfredo sauce being dumped on plates of lukewarm egg noodles.  Her BBF (Black best friend) Emily (played by Ego Nwodim) puts in Amber’s head the idea of falling in love in a place like Tuscany. It’s like something right out of a Diane Lane movie, or the book Eat Pray Love.

Spin Me Round could’ve gone down an interesting route here as a satire of such lusty dramas for bored middle-aged housewives. For a while it appears that’s what Baena is going to shoot for, and it wouldn’t be unlike him to tackle the genre from an unusually bizarre perspective. Instead, the humor is fairly broad, albeit handled by an absolute wealth of comic pros who know how to deliver laughs. Arriving at what she expected to be a lovely country villa but is instead a generic hotel, Amber is introduced to a wacky crew of fellow attendees. Molly Shannon plays the clingy Deb, with Zach Woods as Dana who is the restaurant’s ultimate cheerleader, Tim Heidecker is the self-important foodie Fran. And then there’s Nick, the dreamboat owner of Tuscan Grove played by Alessandro Nivola. When he shows up, he instantly makes a connection with Amber. After a surprise date on his yacht, the two get close, but he also starts acting extremely weird. Oh, and people start disappearing. Well, the women do, anyway. The guys? Eh, Nick seems to show them no attention at all.

The film’s real highlight is Aubrey Plaza as Nick’s devious assistant, Kat, who at first seems to be the one grooming women for her boss. Yes, it’s as creepy as it sounds. Is Nick a vampire or something? Why’s he showing her off to a room full of weirdos (including Fred Armisen) like something out of Eyes Wide Shut? Terms such as “gaslighting” get thrown around when Amber starts to get some bad vibes. The mystery as to what is actually happening is wildly unsatisfying and kind of haphazardly tossed together like a sitcom trying to wrap-up before the commercial break.

And that’s the problem with Spin Me Round in general; it feels slapped together from pieces of ideas that Baena and Brie had. But none of these things are ever fully explored. The film isn’t as funny as it could’ve been given the level of comic talent, but it’s not especially suspenseful as a European thriller, either. Amber is meant to be especially unremarkable, which makes her prone to flights of fancy, but Brie’s performance is underwhelming, as well. Amber just isn’t a very compelling character. When she and Kat go out partying in the Italian night life it’s the only time this movie comes alive at all and it’s only for about as long as it takes Olive Garden to bring out your breadsticks.

Spin Me Round opens in theaters on August 19th.