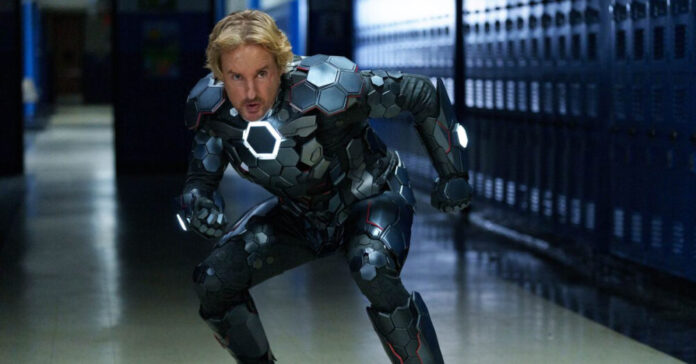 From its bland title to the generic name of its central hero, everything about the Amblin-esque superhero adventure Secret Headquarters is forgettable. The film by directing duo Ariel Schulman and Henry Joost, whose early career was marked by explorations of the dangers of technology and social media (with films such as Catfish and Nerve), casts Owen Wilson as a Dad who is secretly the superhero known simply as The Guard. >yawn<  When his curious son Charlie (Walker Scobell) discovers his father’s secret basement lair, it unlocks what should be a fun superhero romp full of childlike wish fulfillment, but the film is so free of personality and characterization that it fails to spark any emotion whatsoever.

The problem isn’t in the plot conceived by veteran comic book scribe Christopher Yost, joined by Josh Koenigsberg, plus Joost and Schulman. It begins with Wilson’s character Jack, along with his best friend Captain Sean Irons (Jesse Williams), discovering an alien spacecraft that produces a shining orb. Similar to Green Lantern’s power ring, the orb selects Jack as the man to favor, bestowing upon him the powers to become The Guard. From there, The Guard travels around the world accomplishing unimaginable feats of heroism, becoming a legend in his own right and, it turns out, inspiring Jack’s son, Charlie, who has no idea of his real identity. But how could Charlie know that his always-absent, thoughtless father is actually the very superhero he admires?

Many a great comic has taken the meat of this premise, children discovering their parents are superheroes, and run with it. Brian K. Vaughn spun this idea into the fantastic series, Runaways, which then became a pretty decent TV show for a few seasons. The world of Secret Headquarters is strangely inert and unimaginative. Charlie and his pals; love interest Maya (Momona Tamada), Lizzie (Abby James Witherspoon), his bestie Berger ( Keith L. Williams, such a standout in Good Boys!), and Berger’s big bro Big Mac (Kezii Curtis); stumble upon the secret lair by accident one night and treat themselves to a wealth of cool gizmos that any kid would flip over. But it never feels as dangerous or rebellious as it should. A big problem is the script doesn’t offer Charlie, who is played wonderfully by The Adam Project‘s Scobell, to have any defining traits that endear him to us. The same goes for his pals, at no fault of the actors who do their best with thin material. This same problem extends to the villains, in particular, Michael Pena’s war profiteer Ansel Argon, whose mission to snatch the orb is poorly defined at best. Worse, he just doesn’t seem like much of a threat, and we are never given reason to care that Irons unknowingly works for this obviously evil dude.

Strangely lacking in the energy and character we expect from Schulman and Joost, Secret Headquarters is a wannabe start to a Spy Kids-style superhero franchise, but that’s hard to do when there’s hardly anything “super” about it.