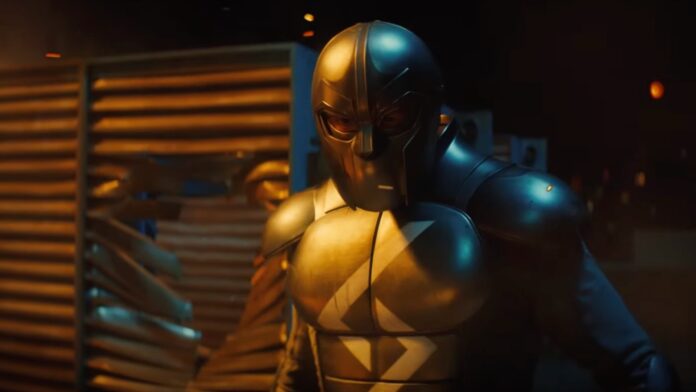 It’s honestly refreshing to get a major superhero movie far removed from the cinematic universes of Marvel and DC. Samaritan is a gritty comeback story starring Sylvester Stallone, the king of the underdog and comeback sports stories as Rocky Balboa. When this film works, as it does much of the time, part of the brilliant execution is the way Samaritan leans on our history with Stallone as the ultimate underdog champion of the working man, the “comeback kid”, to shock us with a perfectly-executed twist. When the film doesn’t work, it makes you want to look up when the next Marvel or DC movie is coming.

The film takes place in the Gotham-esque town of Granite City. This place is a cesspool of crime, but within it are hard-working people just trying to get by. It’s also where Sam Cleary (Javon “Wanna” Walton) and his single mom Tiffany (Dascha Polanco) live a meager existence. But Sam has a dream, and it’s to find his idol, the superhero Samaritan, who vanished after protecting the city from his evil foe and brother, Nemesis, years earlier. Sam’s obsession leads him not only into trouble with local thugs, but it also catches the attention of trashman Joe (Stallone) who, despite denying it repeatedly, is convincingly proven to be Samaritan hiding in plain sight. Getting up from being run over by a speeding car will do that.

Prior to Samaritan’s acceptance that he has been found, the film is pretty flat, with a generic buddy/mentor dynamic between Sam and Joe that drags for too long. Even the reliable Pilou Asbaek, who plays the Nemesis-inspired gang leader Cyrus, is given precious little characterization to work with by screenwriter Bragi F. Schut, adapting his own comic book. There’s an interesting bit where Cyrus points out to Sam that Nemesis is beloved by the poorest citizens of Granite City, who believe he only lashed out at the rich elite, while Samaritan fought to protect the wealthy. It’s a great idea that is never really followed-up on, perhaps because the writer felt the twist would compensate for it. In a way, it does.

That paradigm-shifting swerve is quite something, too, and changes the entire trajectory of the film. It might not have worked if not for Stallone, who when given the right material is every bit the charismatic force he has always been. In fact, Samaritan relies on him to be exactly that. He has to be someone we believe people will look up to. He has to be someone people will want to follow.

Director Julius Avery is coming off the awesomely-grotesque Nazi horror Overlord, and he does a solid job here, as well. He doesn’t seem to have a lot to work with in terms of budget, as actual big superhero battles are extremely few so as to save as much as possible for the impressive final showdown. The fiery slugfest, which includes the use of an all-powerful Samaritan-busting hammer, makes good use of Stallone’s physicality which he still has in spades.

Ultimately, Samaritan is going to be an interesting test case for comic book films outside of the Big Two. While it’s mostly a superhero character drama and lacks the visual pizzazz to compete in multiplexes, the home it has found on Prime Video streaming could be how it packs the mightiest possible punch.