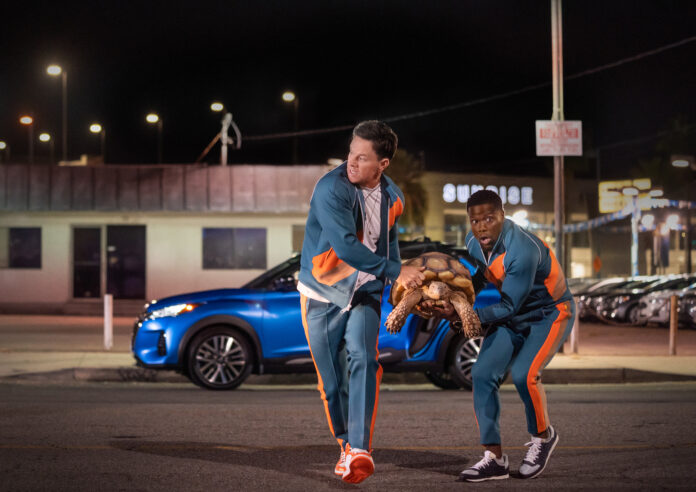 Sometimes you get a comedy that is so devoid of humor, so devoid of comic chemistry, that it must have taken special effort to achieve. Like someone went into it with an agenda to not be funny as part of some sort of Machavellian plan. That’s writer/director John Hamburg’s new film, Me Time, which, sadly, it was me who spent 100-minutes of time in this laugh-free endurance test.

Unfortunately, the opening scene sets a worrying tone. We’re introduced to Sonny (Kevin Hart) and his bestest buddy Huck (Mark Wahlberg) while celebrating the latter’s 29th birthday. The plan is to air glide across Moab, Utah, but Sonny’s a wuss and doesn’t want to while Huck is gung-ho. Of course, something stupid happens and Sonny is hurled off the cliff and forced to glide anyway, with Huck there right by his side. This is their lifetime dynamic.

Many years later, and now Sonny is a stay-at-home dad with insecurity issues, while his architect wife Maya (Regina Hall, playing the nagging spouse) is the breadwinner. After a humiliating dinner with her wildly successful clientele and friends, Sonny is convinced by an exhausted Maya (her befuddled “What???” at one of Sonny’s whining streaks is a rare hilarious moment) to take some time for himself while she goes on vacay with the kids. The kids are basically trinkets and don’t mean anything to this story. Sonny decides the best things he can figure to do are masturbate wherever he wants in the house (he gets caught anyway), hit a strip club, and eat too much at a BBQ rib joint. Bored and somewhat pathetic, he reached out to Huck who is having a Burning Man-esque birthday party at a secluded beach. However, Huck’s frivolous spending has led him into hot water with a “dangerous” loan shark (Jimmy O. Yang, how dangerous could he be?) and the whole thing goes up in flames.

Why? We saw this same plot device used recently with Easter Sunday. Rather than exploring the ideas that would have made that film unique, it veered off into a subplot where an angry gangster wants his money back for some idiotic slight. And Me Time does the same thing, making this a film less about the friendship between Sonny and Huck, or at the very least Sonny’s attempt to find meaning in his life away from the family. That’s what this story is supposed to be about, but instead we have to watch Sonny and Huck scoot around town like morons, kidnapping turtles, pooping in the bad guy’s bed (seriously), and even dumber stuff that goes nowhere. It’s genuinely unclear who this movie is for. It looks like a movie made for guys but I’m a guy and I hated it. Women will have zero reason for digging it. Hart and Wahlberg don’t even seem to be having that much fun, perhaps because they’ve done this kind of tired buddy stuff so many times before.

Hamburg has made a number of terrible comedies, but he struck gold with 2009’s I Love You, Man, which really captured the bro-tastic lightning in a bottle with stars Paull Rudd and Jason Segel. He does not find that same magic here. Hart and Wahlberg are phoning it in, and Me Time is a waste of our time as a result.

Me Time is streaming now on Netflix.

‘Me Time’ Trailer: Kevin Hart And Mark Wahlberg Have A Wild Weekend In Netflix’s New Comedy