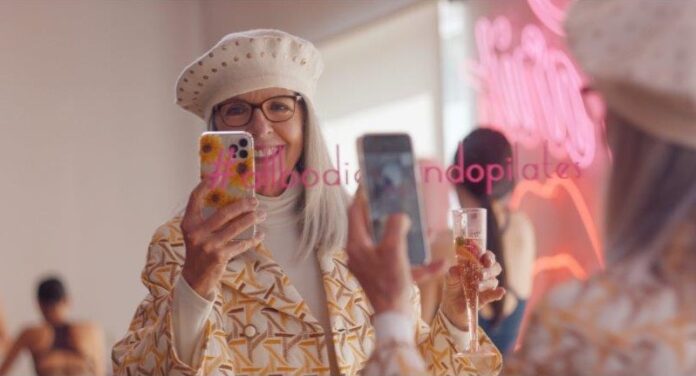 Everyone knows they don’t want to grow old. I’m getting close to my impending midlife crisis, so staying in, doing foolish things when I was younger, and just being an ordinary, boring old person doesn’t sound all that tempting. We all make an effort to stay young by any means required because of this. In contrast, it’s the opposite in Mack & Rita, the latest movie by director Katie Aselton, where a youthful 30-something woman who already feels like an “old soul” achieves her desire and becomes a 70-year-old.

Elizabeth Lail plays Mack, a young novelist who as a child looked up to her grandmother and who after publishing her first book was informed by her manager that “no one reads books anymore” and now makes her living as a social media influencer. Despite living in a society where youth is valued highly, she doesn’t really feel like it’s for her. She envies older folks who just sit at the coffee shop and take in life as it happens rather than going to parties to post on Instagram. When she embarks on a road trip with her friends to attend her closest friend Carla’s (Taylour Paige) bachelorette celebration in Palm Springs, everything for her changes. While they all want to go to a pop-up Bad Bunny concert, she just wants to chill around town.

She politely leaves her friends and visits what appears to be a “past-life regression” booth (i.e., a place where a serial killer would get killed). There, she meets Luka (Simon Rex), a pseudo-spiritual (i.e., fake) guru who, in exchange for a credit card payment, promises to make her into her best self. She imagines how wonderful her life would be if she were old while she reclines on a tanning bed she purchased from Craigslist. Rita exits the tanning bed as Diane Keaton faster than you can say, “This sounds like the storyline of Big,” and that is where all the crazy stuff happens that keeps us entertained for the next 90 minutes.

Carla is told what is happening by Mack, and they decide they need to find a means to restore Carla’s youth. Mack pretends to be “Aunt Rita,” and she and Carla go about their regular lives, and continue to prepare for Carla’s wedding as they try to locate Luka. However, it appears that Mack enjoys playing “Rita.” Despite being young and unbearably gorgeous, Rita’s neighbor Jack (Dustin Milligan) who dog-sat her dog while she was away, is also an old soul, and the two of them begin getting along and having fun. Her social media career is also beginning to flourish. It seems that Instagram users enjoy following older folks who are having a wonderful time at upscale gatherings. As much as Mack would like to go back to the way things were, things are kinda good for her as Rita.

Despite the artificial drama and pretty predictable plot of Mack & Rita, national treasure Diane Keaton steals the show as Rita. While not all of the comedic moments are successful, Keaton does the best she can with the material she is given. Whether she takes hallucinogens or takes a Pilates class for influencers and almost breaks her hip, humor results. Despite being 39 years younger than Milligan, Keaton and Milligan have excellent chemistry together, and their relationship is totally plausible.

Mack & Rita, however, seems to be lacking something. The picture suffers from a weak overall plot that is quite straightforward and predictable. Keaton and Milligan appear to be the only fully realized characters. Mack’s other two friends are so interchangeable that you won’t even remember their names, and Taylor Paige is horribly underutilized. The idea of “changing bodies” has been used so frequently that it is now practically its own subgenre. Instead of taking the simple road and doing what has been done before, Mack & Rita would have been better served if it had tried to bring something fresh to the genre.

Mack & Rita is currently in theaters