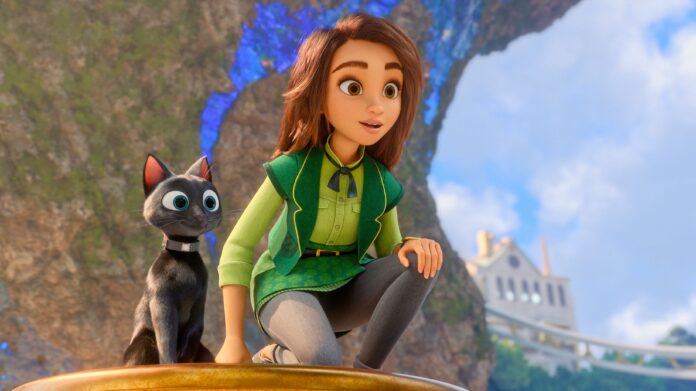 Apple TV+ and Skydance Media are entering the animation world with their new film Luck. In it, a clumsy young woman fresh from the group home discovers that everyday fate is controlled by a world of magical creatures. Aptly named, the film is the first-full length project former Pixar head John Lasseter has been a part of since stepping down amidst sexual misconduct. Hoping to score a win for both Lasseter and Skydance’s animation division, the film spends too much time explaining what it is instead of just being Instead of a smart and simple story that the film’s behind-the-scenes issues bleed onto the screen, leaving not much else but pretty things to look at.

Tony winner Eva Nobelzada voices Sam, a young lady who has not had the best fortune in life. We first meet her when she is moving out of her group home and into her first apartment. Known for nothing going her way, every plate, flower pot, and key she has ever encountered has either broken or been lost. Hoping Hazel, a little girl at the group home, has better luck than her, Sam tells her tale of woe to a black cat who just so happens to be passing by. He drops a lucky penny which after a brief montage of good luck she soon loses.

She once again complains to the cat, named Bob, who of course can talk, (Simon Pegg). She follows him back to the Land of Luck where they devise a plan to try and get another penny to save both their skins from a CEO dragon (Jane Fonda), the leprechaun Captain (Whoopi Goldberg), and a unicorn (Flula Borg). The mythology writer Kiel Murry has packed into this script is dense. It is hard to follow as an adult, let alone as a child. Bob is explaining and reexplaining how the world works long into Luck’s third act. There’s a more simple way to tell this story, but instead, the film gets hung up on the details.

Luck tries to pull the same creative strings seen in Inside Out and Soul, wanting to imagine why we have the luck we have. Instead of being charming and innovative, the film spends most of its 105-minute runtime making bad jokes and explaining the way the magic works. On the other hand, Luck’s visuals are great. The greens of the lucky side of Bob’s homeland are vibrant and inviting. There’s a sequence where leprechauns glide in a Celtic knot formation that’s mesmerizing to watch. The various animals are cute and well-designed. However, taking a chance on Luck is too tedious to be worth the visuals.