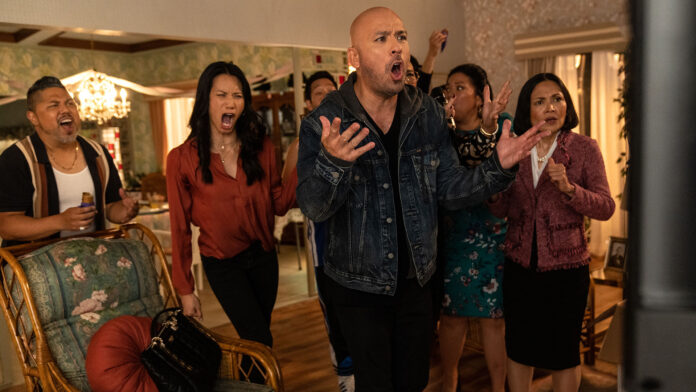 To get it out of the way, I’ve never heard of Jo Koy before seeing him in the dysfunctional family comedy, Easter Sunday. And I kinda like the guy; he’s charming, kinda rough around the edges in a way that makes him relatable and his comedy feel authentic. When Koy is able to just be himself and deliver jokes that mean something to him, this is a comedy that works pretty well, especially as a vehicle for a largely Filipino cast. It’s just too bad everything else seems like it was churned through the Hollywood machine.

Because the point that I can gather from Koy and Easter Sunday is that Filipino families are uniquely insane. I’m sure that’s a big part of his stand-up act, as well. But the comedy doesn’t feel unique or personal to Koy most of the time. Instead, it comes across like any run-of-the-mill family reunion comedy, devoid of personality or cultural identity in favor of broad sitcom situations that might illicit a chuckle or two, but little else. It doesn’t help that behind the camera is Broken Lizard member and Super Troopers director Jay Chandrasekhar, who doesn’t know how to helm a comedy any other way than blandly episodic.

Koy plays Joe, a successful L.A. stand-up comic who is struggling to balance his career, which includes a shot at a major sitcom role, with being a father to teen son Junior (Brandon Wardell), who is tired of being ignored by his busy dad. Joe is also attempting to be a good son to his demanding mother Susan (Lydia Gaston), who is pressuring him to come home for family dinner on Easter Sunday. There’s also beef between Susan and her sister Teresa (Tia Carrere) that Joe is expected to resolve, and the petty crimes and get-rich-schemes of his well-meaning cousin Eugene (Eugene Cordero) who has run afoul of a local gangster by stealing a pair of priceless Manny Pacquiao boxing gloves.

It’s a lot. Clearly, screenwriters Ken Cheng and Kate Angelo felt there wasn’t enough to fill the 96-minute runtime, adding the criminal subplot that absolutely does not work in any context. There’s already so much to work with, including Joe’s lies about his acting career, feigning a success he does not have. His desire to not disappoint his blue collar family who look up to him feels genuine; so does the gentle ribbing they give him over a beer commercial in which he spouts a silly catchphrase.

Individual moments between family members hit home, with Koy proving himself among a cast of veteran performers, particularly Gaston and Carrere. When given the chance to take all of the spotlight, like in a funny church bit in which the pastor forces Joe to take the stage, Koy proves why his stand-up act has been selling out shows for years. The only time his star dims is in the presence of Tiffany Haddish, who is at her hilariously rude best as Vanessa, a cop and one of Joe’s exes who is still holding a grudge. There’s also a great supporting role for Lou Diamond Phillips, who is treated like a Filipino icon much the same as Pacquiao.

The best subplot in Easter Sunday is Joe’s refusal to do an exaggerated Filipino accent to win the sitcom job as the wacky neighbor friend. Joe might do the voice as part of his act, another character actually calls him out on it, but there’s something unseemly about some Hollywood producer, or his aggressive agent (played by Chandrasekhar), telling him he has to do it to earn a steady paycheck. This is a real struggle that ethnic actors deal with every single day, and Koy undoubtedly has grappled with it himself. There’s so much that Easter Sunday does right to be funny and real that it’s unfortunate so much has been compromised to resemble the Hollywood idea of what a family comedy should be.

Easter Sunday is in theaters now.