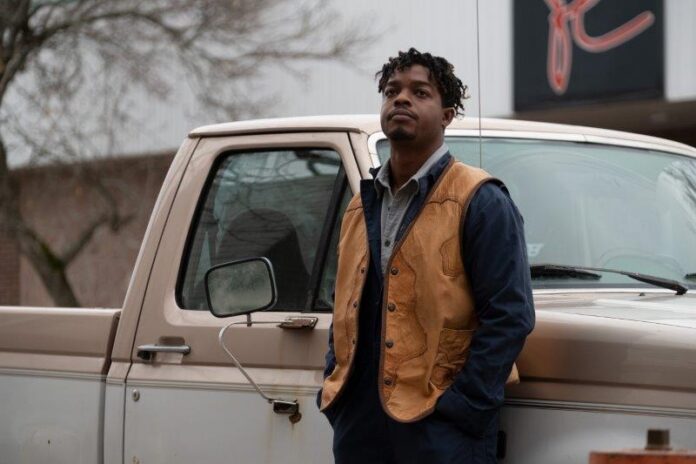 Everyone enjoys a good murder mystery where the victim is falsely accused but will eventually be vindicated by their own means. It’s always an interesting story when an innocent person finds himself in the wrong place at the wrong time and is accused of a crime they didn’t commit, but they dedicate their time to “getting to the bottom of it” (not to be proven innocent, but because they sincerely want justice). If the genre has shown to be successful in the past, why not dip in that well? Why not try using some reputable actors and a mediocre storyline to see if you can recreate the magic of past films, which is exactly what happens in Delia’s Gone.

Based on the short story “Caged Bird Sing,” Delia’s Gone depicts the tale of Louis, an intellectually challenged man cared for by his sister Delia. Louis is portrayed by Stephan James (Genelle Williams). He appears to be rather independent—he prepares for himself and drives his own car to work—but he still depends on Delia for help. Although Delia and Louis are close, when she loses her job, everything changes. Delia informs Louis that she must leave their small-town Ohio home because she needs to accept a job out west after robbing a drugstore to obtain him enough medication to take care of himself. Louis initially responds angrily (and even violently as he throws her against the wall), but the two siblings decide to drink away their sorrows and vow to discuss it the next day. She goes to the local bar, and he drinks the top shelf at their home.

Only the following day’s events go as expected. Louis awakens to find his sister dead on the floor, the house in ruins, and blood on his hands and clothes. Oh, and just as he wakes up to the surprise, local sheriffs Francine (Marisa Tomei) and Bo (Paul Walter Hauser) happen to drop by his house. Louis believes he killed his sister because he was intoxicated and doesn’t remember what happened, so he doesn’t oppose being arrested. Louis, who was raised in a Christian environment, feels that he should be executed and has even attempted suicide while incarcerated. Instead, he is given a seven-year prison sentence and ordered to receive psychiatric treatment while incarcerated.

Louis continues to reside in the mental health facility even after completing his prison term because he feels at home there. Louis is visited by a man named Stacker (Travis Fimmel) who after “finding God,” wants to talk with Louis about that night and assures him that he didn’t kill his sister. Louis responds angrily and demands more information, which causes Louis to be subdued by orderlies and Stacker has to leave the institution. Louis makes the decision to leave the prison with this new information in hand in order to investigate what occurred that night and identify the killer of his sister. Of course, he can walk out, but he assaults one of the orderlies and leaves to find out the truth

As Louis begins to make sense of things, he leaves a trail of intimidation, violence, brandishing of a gun, and even unintentional murder in his wake. Francine and Bo decide to find him as a result of this. Francine is now a detective and Bo is the head sheriff, but they agree to collaborate because they were the ones who initially arrested Louis and want to find a peaceful solution. The two argue back and forth about who is in charge of their case, which unfortunately felt forced and led to unnecessary conflict between them.

Louis slowly but steadily discovers what happened to his sister as Delia’s Gone moves toward its conclusion, as well as the web of lies that were woven to blame him for the murder. There aren’t any major surprises in the script as a whodunit. How realistic the film’s finale is to this kind of circumstance is one interesting aspect of Delia’s Gone. Another amusing aspect is that Louis occasionally serves as an unreliable narrator as the story is delivered from his point of view at times. The performances in the movie are good overall. Stephan James gives a solid performance and keeps moving up the superstar ladder. Paul Walter Hauser demonstrates the reasons behind his upward trajectory. Travis Fimmel, sadly, has little to do in the movie and ends up being completely squandered. Surprisingly, Marisa Tomei is the weak link in the cast because Francine in Delia’s Gone didn’t appear to fit in tonally with the other characters. Marisa Tomei has played stronger roles in past movies, so this might be because of the screenplay. Running at an hour and a half, it feels slow, yet at the same time could have used an additional fifteen minutes of character development and story progression

Overall, Delia’s Gone is an admirable attempt to have a murder mystery with a different kind of protagonist with different developmental abilities. Although it doesn’t always succeed, the cast and their acting skills help the movie strive to make the most of the storyline and deliver an entertaining film.

Delia’s Gone is currently in theaters and will hit VOD on September 9th.