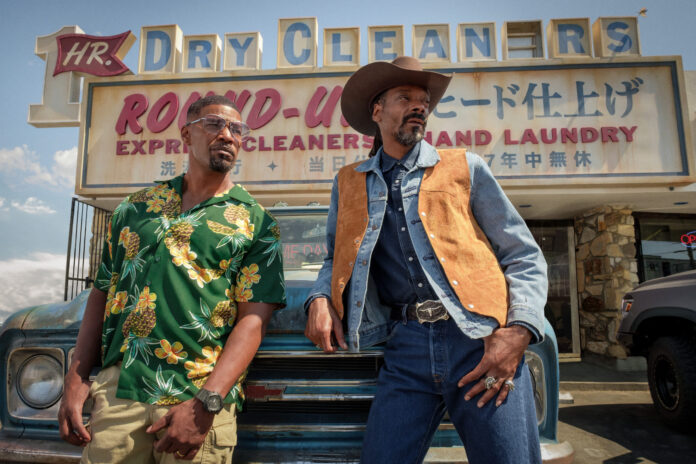 Ever since Blade, people love watching vampire-hunting action flicks, especially when that hunter is as cool as Jamie Foxx. But not Foxx’s signature slickness, some genuinely cool bloodsucker action, and the high-as-a-kite cowboy hat-rockin’ Snoop Dogg, can fully rescue Day Shift from a raft of cliches, shoddy VFX, and a plot that is so lacking in ambition it makes Bright seem like Citizen Kane.

Foxx stars as poolboy-by-day Bud Jablonski, whose primary gig as a vampire hunter is kept hidden from his ex-wife Jocelyn (Meagan Good) and daughter Paige (Zion Broadnax). Living in L.A., shit is expensive, and the price of vampire teeth just ain’t what it used to be, especially since Bud’s had a falling out with the vampire hunter’s guild. They pay the real good prices for dead vamps. In an opening sequence, Bud uses his job as a cover to flush out a seemingly ancient vampire. Like all of the staged fight choreography, it’s surprisingly agile and full of moves that look like they taken right out of a WWE match. Clearly, someone is a big wrestling fan.

The vampire that Bud killed may have looked old, but she wasn’t enough to earn him the big score he was looking for. See, Jocelyn has threatened to move away to Florida, taking Paige with her, if Bud can’t score some serious cash. Yes, the whole plot is about Bud needing to earn enough money to keep his family together. Well, there’s a bit more to it. That dead vamp was the close associate to Audrey (Karla Souza), a sexy and powerful queen with a plan to take over the city with a special sunscreen that allows vampires to walk around in the daylight. Oh, she also sells real estate on the side. Vampire quick sells sounds like it could be a TLC series.

Somehow, Snoop Dogg’s hazy magnetism is lost in his role as Big John, the guild’s best hunter and just a chill dude. Snoop looks stoned out of his mind, and delivers his lines like it, too. Not a bad thing if this were The Beach Bum, but honestly, the role of Big John demanded more of a commanding, authoritative presence than Snoop has ever needed to muster up the energy for. It’s Big John who convinces the guild to give Bud another shot, but only if he’s paired up with Dave Franco as office dork Seth, a by-the-books guy who knows nothing about being in the field.

What unfolds is a pretty lazy mismatched partners action-comedy, with Seth seriously crampin’ Bud’s style. Eventually, the two find some common ground. Twilight is a thing they have to conversate about, after all. But the dialogue between them is pretty lame, as much of the script by Tyler Tice and Army of the Dead‘s Shay Hatten turns out to be. None of the characters are served particularly well, and despite this being an L.A. secretly overrun by vampires it doesn’t feel especially like a fleshed-out, fully-detailed world. Hatten did a much better job giving personality to a zombie-infested Las Vegas. The characterization of Bud is all over the map, sometimes coming across like a complete dope, a deadbeat dead, and a reckless jerk, except for when he needs to be seen as a hero then he’s a pretty generic one. Seth is a one-note nerd for the most part, and other key characters such as the villainous Audrey and random vampire neighbor Heather (Natasha Liu Bordizzo) are given nothing to work with.

Behind the camera making his feature debut is stuntman-turned-filmmaker J.J. Perry, and it’s clear where his strength is. The fights are actually pretty sweet, and while there is plenty of gunplay it’s in the hand-to-hand where it’s most impressive. The previously-mentioned pro wrestling style is similar to Mexican lucha libre, lots of high flying attacks and flips that show off the vampire’s speed and agility. Perry, who has done work on Buffy the Vampire Slayer and Underworld Awakening knows how to present these creatures in the best possible way. He also knows how best to utilize his stars in a multi-platform fight sequence, the best involving Foxx, Franco, and Steve Howey and Scott Adkins, the latter playing a pair of dopey siblings and rival hunters. Perry shows a good grasp covering multiple encounters, some brutal and others comedic, without it becoming confusing for the viewer.

Day Shift has a ton of potential as a Netflix franchise, if the streamer decides to put more money and energy behind it. The biggest problem the movie faces, besides a terrible script, is that it looks and feels low rent, like something that was thrown together. This feeling is inescapable with so many poorly developed characters and a story that’s been sucked dry of any novelty. Jamie Foxx can make killing vampires look sweet as Hell, but that can only go so far and last so long.