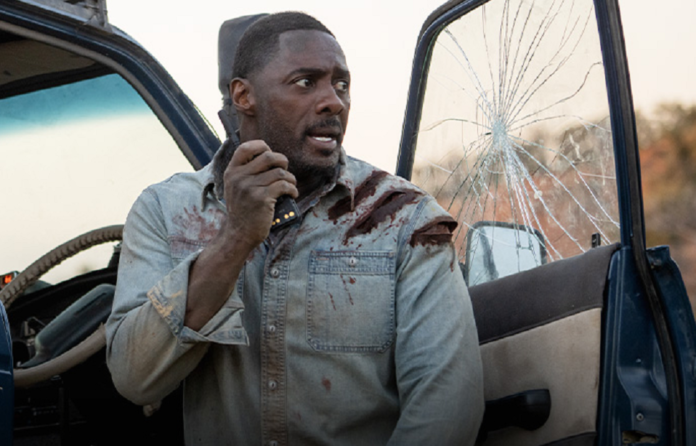 Idris Elba has fought giant starfish and battled the combined might of Jason Statham and Dwayne Johnson, but he’s never been put to the test quite like he is in Beast. The survival thriller from Everest director Baltasar Kormakur, an expert of the genre, offers Elba a role that’s surprisingly meaty and extremely physical, while also making terrific use of the South African savanna and a terrifying CGI lion to get the most out of a lean script about a father’s need to protect his pack.

That father is New York doctor Nate Samuels (Elba), who along with his daughters Meredith (Iyana Halley) and Norah (Leah Jeffries) get away to to the South African plains, and the rural childhood home of their late mother. Nate was estranged from his wife at the time of her passing, and it’s something his daughters aren’t ready to forgive him for. So this trip is not just an attempt to reconnect with the woman they all loved and lost, but with one another.

Meeting them is  Martin Battles (Sharlto Copley, perfectly cast and not just because of the accent), Nate’s longtime friend and the guy who introduced Nate to his eventual wife. Martin works as a protector of the lions in the area, fending off poachers who have begun targeting them for profit. Poaching has gotten out of control in the area, making this already-dangerous terrain deadly on another level.

It’s Martin who takes them out on safari, where they quickly get a glimpse at how dangerous the plains really are. An entire village has been mauled by what appears to be a very large, very angry lion. It isn’t long before they encounter the creature, and it quickly does a ton of damage before smashing their jeep, leaving them stranded in the middle of the lion’s hunting ground.

Beast gets the most from Kormakur, who knows how to make a survival thriller better than just about anyone. The key thing that he’s picked up is that what’s most important are the moments between the action. That’s when we get to see Elba really emote as Nate struggles to prove himself to his daughters, both strong-willed and confident in ways that are encouraging and potentially harmful. If you don’t care about what’s happening with Nate and his family, then it won’t matter when the man-eater strikes. Halley and Jeffries more than hold their own, and it’s refreshing to see the young actresses play confident characters who contribute to their own defense.

The screenplay by Ryan Engle offers just enough for Elba and his co-stars to work with. There are occasional dream sequences in which Nate sees his late wife and she sort of guides him through the ordeal. We also see his daughters come into their own, both to help their father but also Martin who is undergoing his own personal fight to survive both the lion’s relentless attack and poachers with a grudge. Elsewhere, the screenplay is extremely thin. Clocking in at just 93-minutes, Beast doesn’t have enough time to offer many surprises, so you pretty much know where it’s going from the start. This isn’t The Ghost and the Darkness, the classic flick about a pair of angry man-eating lions. Beast keeps its aspirations modest.

Some convincing CGI brings the many lions to life, but it’s the gigantic rogue lion who is most impressive. The mauling it delivers is up there with the feral bear in The Revenant, blending well with the natural backdrop of the South African wilds, a place that is as beautiful as it is treacherous.

While on a smaller scale to other films in this genre, Beast delivers on its promise of Elba versus a pissed-off lion’s snapping jaws and razor-sharp claws.